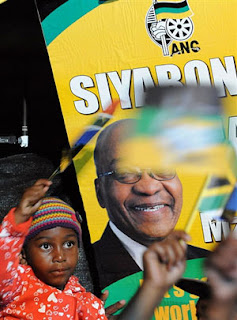 The ANC recently won the South African elections with a little less than two-thirds majority. The DA came in with around 17% and COPE with around 8%.

As I've written in the past, I'm concerned about Zuma. I write that with some trepidation, because I find myself aligned with the views of much of white South Africa. As with many liberals, I like to consider myself above the interests of "my group". That said, I like to think that if I thought Zuma was good for the poor, as long as he didn't do physical harm to anyone else, he would have my support.

There are a couple of things in Zuma that I find unacceptable in a president. Firstly, his perception of, and relationships with women. There's the refrain that polygamy is cultural. What does that mean? What is culture? There's a ton of reasons that polygamy is on the rise in South Africa, and plenty of them are related to the dissolution of the South African family during Apartheid. It is precisely because lifestyles and manhood was denigrated and undermined during apartheid that today there's pressure to be careful how we talk about lifestyles that many South Africans (myself included) don't fully understand. I don't have much right to judge the polygamy of our forefathers, which seemed interested, at least in part, in physical provision. Polygamy is not polygamy is not polygamy. Zuma is a man who believes faithfulness is unimportant, and that his rights to women are self-evident. There is no way that Zuma respects women as his equals. This will bleed into his policies and administration.

Secondly, he seems to be all about power. Mbeki made a ton of mistakes, but I never felt he was vindictive. I always felt that he was about South African society becoming the best it could be. I'm not sure that Zuma wants that, but I hope to be wrong. We're one step removed here in Boston.
No comments: