Reflections on learning to farm in the shadow of Big Ag

As a mom, I’ve been trying so hard to do things differently from the punishment/coercion/reward model that was passed down. I’ve been thinking a little about how that relates to experiences of food systems:

I want to be kind and gentle and responsive etc with our kids— but when I first started focusing on kindness, on explicitly "doing things differently" it was…. problematic. Partly because it dismissed the strengths of my own upbringing, and the fact that it was not all about punishment or rewards-- it was about living as a helpful member of a community and lots of other things. But also, where I departed from what I had grown up with, there were worlds I knew not of. I could not simply be consistently kind and gentle using willpower alone. Nor would those actions— taken alone— be helpful to my kids. Kind words— for example, were not necessarily their core need in times of crisis. They needed kindness backed up with deep empathy, good listening, a squishy welcoming belly: these things take time and effort! My kids needed to be individually known and for me to respond to them as a person, not because I was being gentle for my own self-edification.

To live out ideals in a deeper way, I needed an extensive supporting structure to help me: practice with genuine empathy, some of my own needs being met, prayer, lots of childhood development books, a good night’s sleep, feelings of support and encouragement around me, and so on. Otherwise I waver(ed) between a confusing mix of beliefs and ideals.

I feel a parallel between this experience and the food system. We are trying to break away from the system we have inherited; how we currently farm and eat, and it is deeply necessary. There are important ideals that we should be striving for, but these ideals cannot be effective, sustainable, or fully realized without a full cohort of support structures. I would even argue that some of the health motivations of eating local or organic are more tentative…less robust… when it is only the exclusive few who get to eat that way.

In the Good Food Clubs, we try to support small farmers, small businesses, and in general our goal is towards organic, local, biodynamic, permaculture. The challenge is— we live in a world where for the most part, none of the supports are there. The odds are weighted against small, organic, biodynamic, farmers.

When I see a farm that is touted as perfect, I get nervous for several reasons:
This is NOT my trying to argue that we should not support awesome organic local biodynamic or permaculture farmers. We are fully invested in the dream. Support us and those like us! Please! But don't put us on a pedestal, and don't discount the importance of any and all family farmers, all small business owners operating in an environment that is incredibly difficult for small food based businesses.

It is just to say: let us not assume to know a farm’s story, given that we are starting from a tremendously skewed: Big business, Big Ag, Big Food world. To jump out right into organic, local, biodynamic, permaculture, without examining all the support structures? It’s like when I try to be kind to my kids without considering all the things I needed— well beyond willpower— to do so. It's very difficult (and in our case absolutely not profitable).

The desire to farm in a particular way does not make that approach sustainable or uniquely helpful, in the absence of infrastructure.

The desire to eat local and organic often seems to be have a uniquely urban character— almost like we are entitled to literally have our cake and eat it too. Urban artisanal production sometimes also has that flavor of the teenage know-it-all coming to set us right, not realising they are in fact joining in on the traditions of their grandparents. And as we’ve dived into farming, I’m amazed by the depth of knowledge conveyed by old farmers, more so each time I lose a crop because I thought I knew better than my dad.

So as we reach out to farmers and small business owners, I do so wanting to learn, not to criticize or tick off boxes of all the things I consider important. I want to hear their story, and see if we can support them in doing even better.

I’m conscious that this may have a weird tone (almost pro some romanticized past— which in the South African case is particularly problematic), and I feel like I have to explicitly state I’m not talking about recreating a romanticized past. I’m talking about the need to build strong infrastructure that supports better consumption practices, and build on existing farming knowledge, particularly small-medium sized farms, because while most farmers are imperfect, the very real alternative is essentially corporations running very large farms.

I’m shocked by the challenges of being a small farmer, well beyond actually producing food sustainably. Farmers have to be consistently productive, grow the right things at the right time to market specifications, have the right market, know how to get it to that market affordably with an intact cold chain. You can’t be too expensive, but you have to be expensive enough that you make a living and so do your workers. If you want to farm animals— the deck is even more strongly stacked against you if you’re a small-scale operation. To do so organically adds another layer of complexity and labour: getting nutrients from manure or vermicompost is orders of magnitude more complex than grabbing a bag of fertilizer; harvesting a permaculture food forest can be like walking through a maze. The farmers— the old farmers— who somehow succeeded in doing this, have so much knowledge to share. Importantly: the networks through which they did all these things are dying because these farmers are leaving farming and not being replaced, and young farmers like myself have none of these networks.

I also want to raise the issue of casual labour. Increasingly, labour on farms is casual and seasonal. Which often sucks if you are the casual worker. I interview former farm workers (who lived on farms) sometimes, and I notice the responsibility farmers had towards their workers, far more responsibility than I would feel comfortable taking on. Those are treacherous waters, I know, so I do NOT mean to romanticize deeply unequal and often racist relationships, but only to highlight depth of responsibility, which highlights my own state of privilege, and how little I want to have my livelihoods so intertwined with others. How nervous I feel when I am responsible for others' standard of living.

There is a need for many more people who know (and do) the basics of farming in their context. We need to build robust networks for all the crazy steps needed to survive and thrive as a farmer. It may be ok to valorize seemingly perfect farm practices. But unless the system changes fundamentally, we will simply be raising up (and bankrupting/destroying) waves of young farmers or their workers, to the benefit of the consumer. Right now, it feels like the consumer holds most of the power, and I think this should change.

There are currently very few ways for a farm to be organic, profitable, responsible to their workers (by that I mean a true living wage), and sustainable long-term in South Africa (and elsewhere), without grants from department of agriculture to offset infrastructure costs and a supportive consumer base.

If you can afford to eat local and organic for every meal, there is a strong possibility that your work/brain is overvalued (I know mine is, at least until I am farming full time) and that overvaluing is intertwined with the very same Big Food, Big Ag, etc that concentrates profits and shares them with people who are actually taking the least risk. So we should be careful about casting ourselves as the heroes of our stories.

A while ago I went to the funeral of an old farmer, and all the members of the local organic soil association attended. I was struck that very few of them still had family on the land they’d previously farmed on. I was struck by this because they had, between them, many decades of experience of organic farming, which was set to be lost— the new (artisanal) farmers on the block, to my knowledge, are not connected to this older generation. I was also reminded that organic farming has been around for a really long time— thousands of years, even-- organic farming has historically fed the world, and is just as efficient and productive, if you start to actually measure all the toxic externalities of Big Ag (in particular, the use of fossil fuels in place of labour). I dream of ways for that knowledge to become intuitive to a new generation of farmers— to a diverse group— that more people could be farmers.


I think of farming like certain types of cooking. You know all the cooking that doesn’t use recipes, that is just passed down, and known, in a deep way? We’re trying to farm with none of that knowledge, and hoping that over time, we will be the ones to pass that knowledge on. Our knowledge is new, unproven, tentative. It will get stronger, more robust, able to stand on its own two feet. But in the meantime, I look to farmers with more experience, I look for the quiet eye roll while we’re describing our plans, and I learn.
No comments:

Adventures in Seoul, and adjusting back...

This trip to Korea was the first where we had to buy 5 seats (and 5 entries to most things). So we took advantage of borrowed bicycles... Bikes really helped to keep the kids in their comfort zone. Though we didn't go to many museums or eat too much unfamiliar food, they still absorbed a lot from being in a different environment.

Our kids are all at different stages and we had to figure out how to meet everyone's needs-- Eli likes to know what to expect and loves to bike everywhere, Hana wants adventure, preferably in the form of playgrounds. Noah doesn't want to feel that someone is trying to coerce him (who does-- but a lot of museums in Korea geared towards kids are explicitly "educational"). We are really lucky to be able to travel and see family, and we don't take such a trip lightly-- we are not relaxed flexible travelers. Everyone did very well, and it is amazing for them to be able to spend time understanding different perspectives on the world, and spend time with Eugene's family. 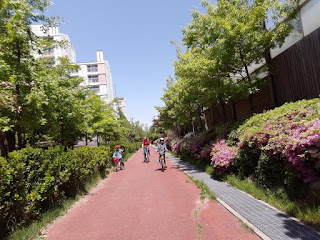 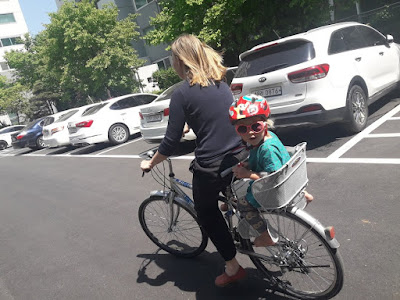 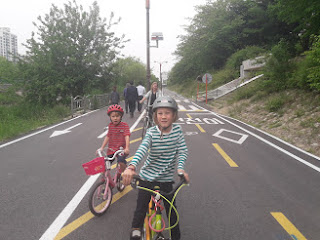 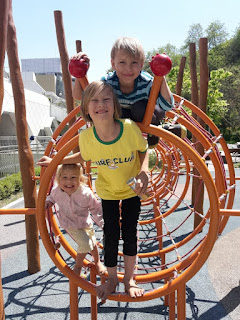 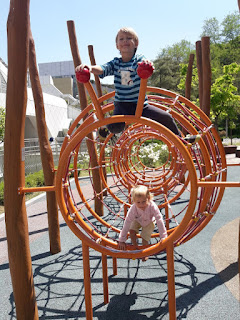 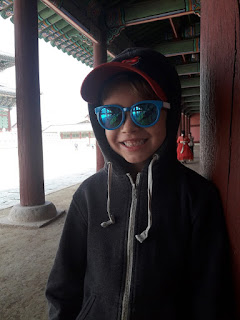 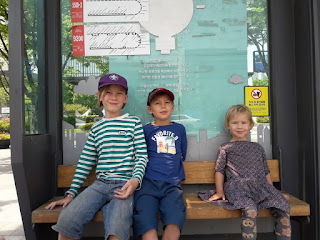 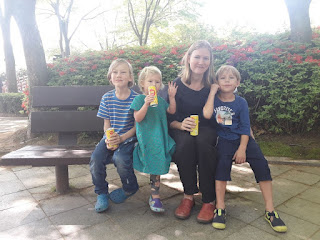 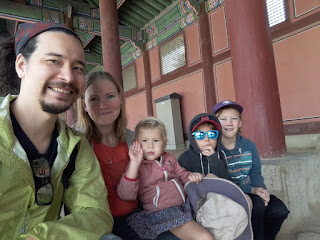 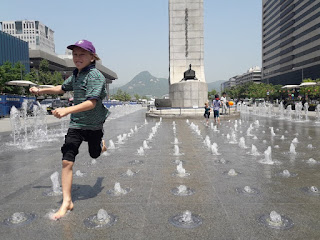 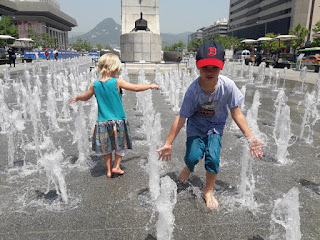 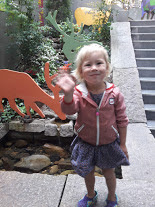 We were so grateful to my parents for holding the fort while were away. And back home, we were back to business faster than you could say hot compost... 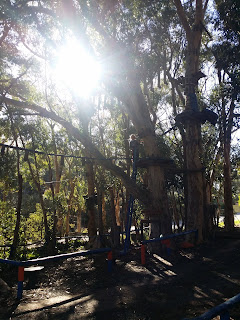