Although my thanks are not likely to reach back to the Watertown Greek church, I wanted to thank them here all the same. 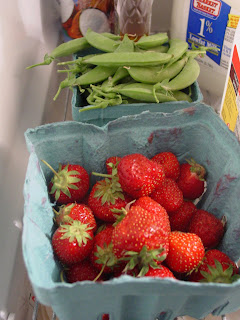 This weekend is the Annual Greek Festival here in Watertown—with food, drink, dancing and games. As a renter—and not terribly outgoing person—on a street with many churches and schools, it’s not always easy to feel at home. I wanted to give recognition to the Greek church who reached out to their neighbors and gave us all coupons to attend and enjoy a free (and super-good) Greek meal at the festival. You guys are awesome!

Eug and I made it out to Red Fire Farm for the first time, after receiving the share for the past three weeks. This week, our share (thanks Connie!) had: turnips, summer squash broccoli, onions, lettuce, parsley, dill and collard greens. My worms are super, super happy with variety of scraps—they’re eating like they’ve never eaten before. 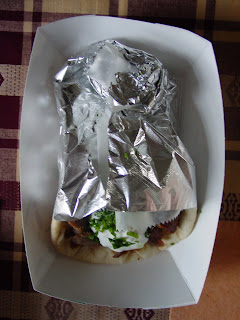 We’re also sharing a fruit share, which, in addition to the quart of strawberries per week allowed eight quarts of pick-your-own strawberries (so far). Visiting the farm and getting strawberries was amazing! The intense rain the last few weeks had clearly taken a toll, but we were still able to pick plenty and just enjoy a really well-run community farm.
1 comment:

Saviors and Survivors Part 2: Darfur and the question “Who is an African?”

The question “Who is an African?” was one of the most important and divisive questions during colonialism. It remains one of the most important questions today in Darfur and other parts of Africa. A brief background: the war between the North and South of Sudan was often reduced to a war between Christians and Muslims, or blacks and Arabs. People were asking who really belonged (and where) as well as who had claims to what-- claims to land, to Islam, to Sudanese culture and tradition, to the Arabic language. Darfur was cut along slightly different lines, but again the question was “Who is the real Darfurian?” “Who is the real Sudanese?” “Who is the real African?” "Who is Arab?" "Who is the real Muslim?" 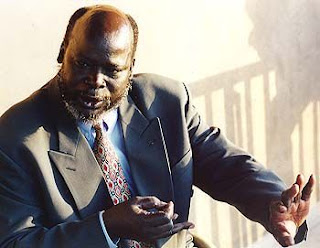 Mamdani quotes John Garang’s (the leader of the SPLA who died in 2005 after becoming the vice president of Sudan for just 12 days) 1986 speech in which he struggles with the felt need in Sudan to be "Arab": “Others get frustrated as they failed to discover how they can become Arab when their creator thought otherwise and failing to find this... they take refuge in separation." Importantly, Garang believed in one Sudan, and even in Arabic as the language of Sudan. He believed that regions of Sudan could persist without succession-- or at least, that this might be the most practical options for all Sudanese.

, my take away message is that, as in so many parts of Africa, identity can be constructed along destructive lines, that those lines are super complicated, and that a community never has total power over their identity. Bringing it back to our lives and our identities, the lens through which we approach other people is surely defined by our histories, our knowledge of our country or community, but also our overall belief system. Garang argued in 1986 that one takes refuge in separation- not that separation is a natural first choice.

On a fairly unrelated note, I wanted to include an exerpt from Mbeki's "I am and African" speech, for some inspiration:

Thabo Mbeki “I am an African” 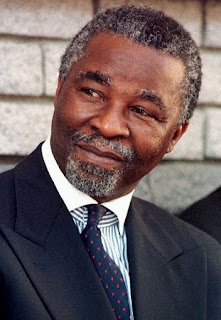 “…Today, as a country, we keep an audible silence about these ancestors of the generations that live, fearful to admit the horror of a former deed, seeking to obliterate from our memories a cruel occurrence which, in its remembering, should teach us not and never to be inhuman again. I am formed of the migrants who left Europe to find a new home on our native land. Whatever their own actions, they remain still, part of me. In my veins courses the blood of the Malay slaves who came from the East. Their proud dignity informs my bearing, their culture a part of my essence. The stripes they bore on their bodies from the lash of the slave master are a reminder embossed on my consciousness of what should not be done… My mind and my knowledge of myself is formed by the victories that are the jewels in our African crown, the victories we earned from Isandhlwana to Khartoum, as Ethiopians and as the Ashanti of Ghana, as the Berbers of the desert….

I am born of the peoples of the continent of Africa. The pain of the violent conflict that the peoples of Liberia, Somalia, the Sudan, Burundi and Algeria is a pain I also bear. The dismal shame of poverty, suffering and human degradation of my continent is a blight that we share. The blight on our happiness that derives from this and from our drift to the periphery of the ordering of human affairs leaves us in a persistent shadow of despair. This is a savage road to which nobody should be condemned. This thing that we have done today, in this small corner of a great continent that has contributed so decisively to the evolution of humanity says that Africa reaffirms that she is continuing her rise from the ashes…
Whatever the difficulties, Africa shall be at peace!

However improbable it may sound to the sceptics, Africa will prosper!”
No comments:

Saviors and Survivors Part 1: The Save Darfur Movement 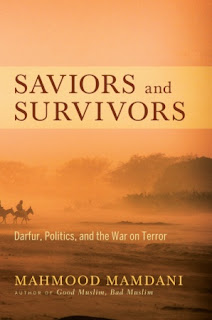 Saviors and Survivors, by Mahmood Mamdani, opens with a discussion of the Save Darfur Movement.

When the movement was just starting to gain momentum in 2004, I was asking "how can I get Africans and Wellesley students to be aware and understand the genocide?", "How can people have a nuanced idea of who is killing and why?"

It's striking that I wasn't asking questions like "how many people are dying?" or "why is this the issue of the day?"-- I suspect that those seemed like jaded, cynical questions to be asking in the midst of a crisis. Yet these are exactly the questions that Mamdani 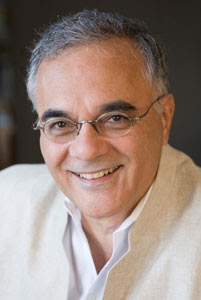 I was well aware that the peace agreement between North and South was convenient for international politics, and in general I consider myself relatively knowledgeable about Sudan after gravitating towards Sudanese history in college. It certainly didn't feel like I was being used in any way. It felt super important that the international community didn't sit back, as it had during the Rwandan genocide.

There was no question that Darfur was important to think about, that some kind of intervention-- even military intervention-- might be warranted. I looked critically, but was at some level impressed by the giant T ads the Save Darfur movement was able to paste around Boston.

That said-- here are some of the questions Mamdani asks in his chapter:

-- Why did no one question when New York Times columnist Nicholas Kristof inflated the numbers of excess deaths in Iraq while calling for intervention and attention? Is it because no-one knew enough to question? Were facts less important because the story was about a faraway place?

-- What does it mean that there were actually more excess deaths in Iraq at the hands of American soldiers (these deaths were associated with "counter-insurgency", which is considered an acceptable role of government) than in Darfur?

-- What does it mean that the greater numbers of deaths in Congo (even today) and Angola were ignored in favour of a U.S. focus on Darfur?

-- How did the Save Darfur Movement gain such widespread recognition, and how did it become so well-resourced? How could it afford that million dollar ad campaign? Could that money have been more useful in Darfur?

From these questions (questions I didn't ask in college) I sense a tension: Activists, by definition, need to act, to respond to injustice and be appalled at senseless violence. At the same, activists need to study and understand the context and ambiguities of our priorities. Perhaps this tension could manifest in the type of activism we try to foster-- learning together and feeding our priorities and fairly nuanced understanding back to politicians and NGO leaders-- vs. calling for military intervention and creating flashy campaigns.

Simplistic campaigns may be effective at generating interest, money and momentum, but those campaigns feed into the fast food culture of instant, visual and sensual gratification and short attention spans. The culture that this blog is undoubtedly a part of!
2 comments:

A recent New Yorker article by Atul Gawande tells the story of the town with the highest health care costs, set against the Mayo clinic. Two things are striking:
1) The best care-- the care with the best health outcomes-- is not the most expensive care.
2) The care a doctor provided depended a lot on their medical training and their personal beliefs about medicine.

Here are some excerpts:

"Two economists working at Dartmouth, Katherine Baicker and Amitabh Chandra, found that the more money Medicare spent per person in a given state the lower that state’s quality ranking tended to be. In fact, the four states with the highest levels of spending—Louisiana, Texas, California, and Florida—were near the bottom of the national rankings on the quality of patient care."

"Fisher found that patients in high-cost areas were actually less likely to receive low-cost preventive services, such as flu and pneumonia vaccines, faced longer waits at doctor and emergency-room visits, and were less likely to have a primary-care physician. They got more of the stuff that cost more, but not more of what they needed."
1 comment: 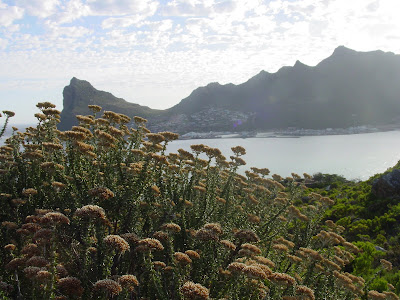 Eug and I arrived to Cape Town at 9:15pm, and before we had set our bags down, found that not only mom and dad, but also Sam, Julie AND Kim had come to the airport. This when we were hiring a car. My family is pretty cool.

At the car hire place, the car person was a little worried about how 5 people were going to squeeze into the smallest class of car. After explaining that these were my siblings and that they had another car, the guy was even more confused. It went something like this:

Then we sputtered away from the airport, trying to remember how to drive a normal car. And remembering to drive on the left side of the road.
No comments: