In the immensity of global politics, my sense is that we must press on, with the hopes that many small actions over many years (as well as special actions and special resistance), will be right and helpful, while owning up to our inevitable complicity in causing harm. So in that spirit, our monthly update:

This month got our first family Wild Card, which allows us entry to most National Parks in the area. This is a big deal because now we actually live near to a lot of national parks: Silvermine, Cape Point, Boulders. For non-South African readers, this means we can swim with the penguins all year round, which is basically our homeschooling curriculum this year. You have Sonlight or whatever, we have Penguin-Swimming. All of this hinges on the assumption that one cannot but be learning when surrounded by penguins. 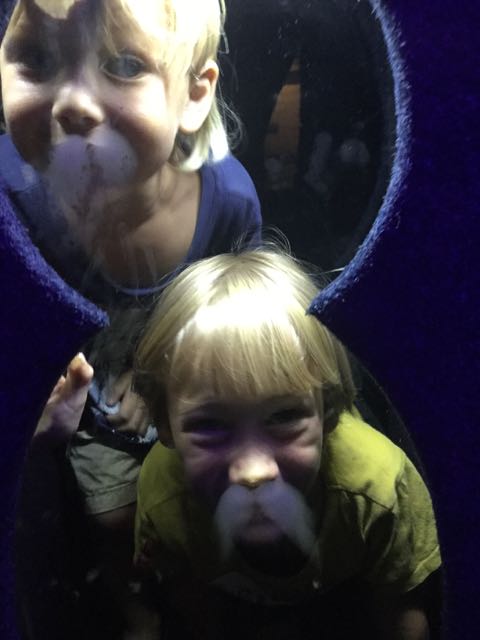 With much of the infrastructure of the farm in a good place, this year I'd like to do something as close to the ConPact of The Non-Consumer Advocate as possible. No new stuff. But we'd also like to follow the kids interests where they lead. Which has led me to think anew about how one navigates trying to be non-consumerist and support the kids learning, when one often needs to go in unexpected directions based on their interest.

I discovered that there is a really strong second hand market for legos in Cape Town, which means we could still get legos for the kids without buying new stuff. So not just penguin-schooling. Penguin + Lego schooling. We also were able to find a body board and flippers second-hand-- which constitutes a second-hand curriculum because of the whole Penguin-swimming thing. On the other hand, Noah is currently really into X-Wing, a Star Wars tabletop game we found ourselves with last year. In South Africa, X-wing expansion packs aren't available at all, and we'll almost certainly buy one or two new if we eventually visit N. America.

The first month of the year brought with it our first ducks for eating. Eating our first ducks was hard, but it brings into focus what we're trying to do and allows us to think through our options (veganism? probably not yet). Out of 10 ducks (4 months and older) ready for eating, we sold/bartered three. We have 13 younger ducks that will be of age as we process the older ones (2 at a time, every two weeks.) So unlike people who raise chickens for meat and do one huge batch at a time, we'll do two every two weeks for now. This works for us because we don't have consistent refrigeration, being largely off-grid. Eating our first ducks... a bit small... kindof tough.... probably a way to gradually wean ourselves off meat and think more carefully about food. Less River Cottage, more Bear Grylls or whoever. We're at this stage financially where up to now we have forked out for very expensive, free range/organic meat, and though we only eat meat once a week, I'm struck by all that bit of meat involved, just for me to eat it in a few minutes. That is, I think eating a nice bit of sustainably raised meat once a week might well not be at all sustainable. Perhaps it's just because we're amateurs, but it seems like it might be better to eat more duck eggs or fewer ducks. Though these things are not nearly as black and white as vegans and vegetarians might hope.

Our neighbours were having trouble with their geese eating their trees, so we swapped three youngsters and one adult female muscovy for 2 large Emden geese.
The hope-- which I know I keep repeating so bear with me-- is that the more diverse a farm is, the more productive it can be without becoming unsustainable. At some level, it also means more labour. It seems like we have just enough capacity for us to keep ducks happy free-ranging when eating about one duck a week-- which means about 25-30 ducks at any one time. Free-ranging ducks means the ducks-- taken alone-- are not nearly as efficient at feed conversion etc. as they might be in a factory operation, or even a large scale organic operation where they harvest at 70-80 days (Ours are over 120 days). In terms of efficiency and feed costs, 5 chickens seem to be better (27 eggs or 2000 or so calories a week for 4 hens), as compared to 4 ducks (1 duck for eating, or 1200 calories a week), but this is probably related to how we're managing them.

All these eggs and meat? Currently only about 7% of our total calories (not even counting the calories brought onto the farm as feed). Add honey, and we're up to about 10% of our calories. This year I'm hoping to experiment with different ways of decreasing the amount of grain consumed by our chickens and ducks. Right now the ducks (30 or so) and chickens (6) consume about 45kg of mixed grain every month, which is much less than their total calorie needs, but still quite a lot of grain. I tried sprouting barley but I couldn't keep it going, there were too many other chores.

As our annual garden gets up and running this winter (or whenever the rains come), we'll hopefully start to get significant calories from the vegetables grown in our annual garden. We're eating quite a lot of moringa (yet this amounts to only 400 calories, or less than 1% of our calories). All to say, one year in and our calories are still mainly from outside the farm. Our farm is set up to provide a LOT of fruit calories in the long term. We'll also eat a few geese every year- who seem to have the best feed conversion of all because they just walk around eating grass.

Of course, it's not all about calories. It's also about micro-nutrients, living close to the land, raising our kids, etc. It's just that we're still highly dependent on much largee farms to stay fed. I don't think it's appropriate to live close to the land just for the enjoyment of it, it has to also be for sustenance, or else one is just exporting your food production elsewhere.

These calculations are motivation for me to focus more on vegetable production this year. We've made the beds, prepared the soil, and this winter it'll hopefully be time to focus on planting veggies. The garden beds have also benefitted from our first round of humanure.

Next month, we're holding the first market day of a Good Food Club (basically a once a month co-op) we've started here in the Deep South. It wasn't our idea: we've been part of another group over the mountain for a few years. But we agreed to start one on this side of the mountain because of the election of he-who-shall-not-be-named, as a way of building bridges rather than walls. Bridges between different people in our community, and more direct lines between farmers and customers, supporting small farmers. It felt right for us, especially during this time when we're not producing very much of our own food. Lets hope it's a good move for our community and for us-- Please pray with us that it goes well.
No comments: