A few people commented that they missed my old blog, which was more personal. I figured since this blog is not exactly bursting at the seams with readers who are tied only to ethical consumption (as far as I know), I'll just use this blog to write both personal and "of interest" things right here. I also have been finding it hard to divide content that seems to fit here, from content that would be better suited somewhere else, so it's naturally becoming more of a mishmash of things. (did I mention I welcome contributions? I will turn the comments section on so it's easier to get in touch with me.) So although I'll not to be extremely personal, as I've chosen to have my name linked to the blog, I'll also try to speak more about the kinds of things I've been learning/working on.

I recently began a new job, working for a government agency and continuing to work on refugee issues in Boston. It's exciting and wonderful for me. I believe that refugees may be uniquely suited to understanding many of the trends we see globally. Refugees are uniquely able to be bi or tricultural. This, with the qualification that most refugees have been through really difficult events. But, as after WWII, refugees may be able to be the visionaries who see societies and communities from the inside AND from the outside, simultaneously. I've always been struck by the gallery of Prominent Refugees, found on the UNHCR homepage. I past one extract from that resource, below.

It's getting warmer here, and flowers are getting ready to come out. Boston feels more like home now that I have a Green Card (thanks be to God) and can stay pretty much indefinitely. The process of getting permanent residence was MUCH easier than expected. Though expensive, it was very fast. With that optimism, here is one short piece from the UNHCR gallery: 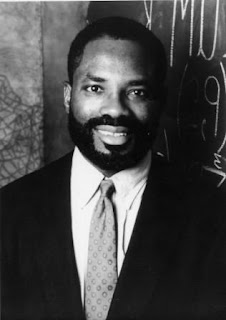 A "father of the Internet", sometimes called the Bill Gates of Africa, computing superbrain Philip Emeagwali spent years of his childhood in a refugee camp before he went on to become, in former US President Bill Clinton's words, "one of the great minds of the Information Age".

Emeagwali grew up in Onitsha, in south-eastern Nigeria, one of nine children of Ibo-speaking parents. He showed early promise at school, even though he often had to work to help support his family. He was nicknamed "Calculus" by classmates for his extraordinary abilities in maths. His father, a nurse, would quiz him with 100 maths problems and leave him only an hour to find all the solutions. By the time Emeagwali entered fifth grade, his teacher would let him take over the class when he was absent.

In 1966, fighting erupted between the central government and the ethnic Ibo population. In the Biafran civil war that followed, the south-eastern region attempted to secede from Nigeria, and Emeagwali spent most of the period from 1967 to 1970 in a refugee camp. The Nigerian government restricted food importation to Biafra, starving nearly one million refugees to death.

In 1974, Emeagwali went to the United States on a scholarship with $140 in his pocket. Fifteen years later, he graduated in mathematics, civil, coastal and marine engineering and computer science. In 1989, he won the computing world's Nobel Prize, the Gordon Bell Prize, for solving a problem that had been classified by the US government as one of the 20 most difficult computing problems ever. Using 65,000 processors, he was able to perform the world's fastest computation at 3.1 billion calculations per second. His invention is widely used in programming and building the world's most powerful supercomputers and has also been used to maximise petroleum extraction.

Emeagwali has been living in the US since 1974 and underlines the huge contribution that immigrants have made to America. "Third World countries are giving technological aid to the United States that is worth about 12 billion dollars a year. One in 20 Americans was born abroad. Two thousand Nigerian doctors practice in the United States. There are more Sierra Leonean doctors in Chicago than in Sierra Leone," he says.

At his own website, emeagwali.com, he welcomes browsers to "the first personal website on the Internet." He has helped promote Africa ONE, a project to loop the entire African continent with 30,000 km of fibre-optic cable lines so that phone calls from one African country to another will not have to pass through Europe.

When Emeagwali was asked what qualities he would like to pass on to his son, he replied, "I want him to be inspired by the fact that I was a high school dropout and an ex-refugee who overcame racism and made scientific contributions that benefited mankind."