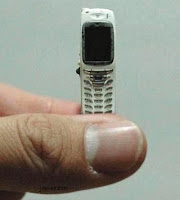 Our cell phones are about two and a half years old and we're thinking of getting a new (hopefully cheaper) plan. The plan automatically comes with a new cell phone, so I was thinking about simple ways to lessen the impact (financial, social, environmental) of our purchase.

One positive thing we've learned by taking the purchase seriously and slowly is that firstly, we could wait until Black Friday (the day after Thanksgiving) when there are specials/sales on cell phone plans. Secondly, we learned that we can get a 15% discount on a plan through his work, provided we go with AT&T or Verizon.

Of course, there the option of avoiding buying a cell phone entirely. We probably won't go that route. A second option is to donate or recycle our current cell phones. If you're in the U.S and in a similar position to the one we're in, check out these options for recycling, donating, or even selling your phone:

Donate your cell phone on Wireless Fundraiser
Sell or recycle your phone on Gazelle or Cell for Cash
Knowing these options before we buy our new phones will make it very simple to place our cell phones in the mail right after we set up the new ones. I know that if we leave the old phones lying around for a week, we'll never get the energy or momentum to donate them. I have to act immediately.

We're looking to decrease the overall cost of our phone. And we're bound by what's available with the plan we go with. (or are we?) There are a lot of different options which are likely to come out in the next while, but I think the phone itself-- the amount of energy it took to produce and the amount it will use day-to-day, seems fairly standard across different brands.

Raw Materials
Samsung recently came out with a biodegradable cell phone which, as far as I can tell, is not yet available for purchase.
The Nokia 3110 Evolve is also going to be coming out soon.
Samsung has come out with a concept phone that completely excludes plastics:
SLIQ cell phone

There's clearly a trend towards telephones that are eco-friendly, to the point of being able to function with kinetic energy only. We also seem to be a few years away from that, though. As someone with more than one computer (don't ask how many) in our one bedroom apartment, I am being somewhat hypocritical to imply I'm an Energy Star woman. I'm not. But if I can know my impact a little more, that may be a good first step.

UN Coltan Site
What Is Coltan?
This short Youtube video helped me get a sense of what Coltan is and what it means in the Congo. There has been a massive increase in demand for it, as it is important for capacitors (and therefore many cell phones). As a result, in eastern Congo, geurilla's have been funding their war efforts through the sale of coltan, even when this means the wholesale destruction of forests.

In Eco Facts, Motorola directly confronts the publicity around this mineral. Although I'm sceptical about my own understanding of where coltan sits in the world economy, I do feel that one could argue for lower consumption of technological products in relation the struggle for this, and many other, natural resources. Even though I cannot see the relationship clearly, there is clearly some, not entirely beneficial relationship between our consumption of technology and the resources that have been garnered for that product. The same is true for any product, but I would argue that mined, non-renewable products deserve a special respect.

I am a Boston-based freelance journalist currently working on an article on the Somali community in Boston. I came across a post on your blog in my research, and also your name has come up a few times. I wonder if it would be possible to speak with you briefly, via email or phone, to get some background knowledge and contact information.

I'm honoured-- thank you. I can't see to figure out how to write directly to you, so I'll just hope you read this comment. You can e-mail me at hunterjo at gmail.com, and then set up a time to talk by phone.

All the best,
Jo