More off-grid (ish) farmlike stuff for us in Cape Town, as well as an update on our composting toilet


Electricity
As summer gets closer, our electricity situation improves, but we probably could still be more comfortable with a wind turbine at some point (perhaps in winter, if that turns out to be possible for us). At night, the only appliance running in our house is one light, for the kids, because our battery life lasts only about 2 hours past sunset (mainly because we need to keep the batteries charged to 50%-- even that is probably not great for battery life). The main challenge with this is our deep freezer. Our deep freezer is super useful because we don't have a refrigerator, and we're not growing much on the farm just yet. So the freezer has milk, cheese, some meals where we doubled our ingredients and made two batches, butter, and sometimes meat. I'm sure we would be able to adapt if we needed to. But the tradeoff-- not having things that need to be cooled-- may be untenable (and unsustainable) in its own way, as we live a little bit away from the nearest source of dairy, in particular. So for now, we have the freezer going full blast during the day (the solar panels can handle this no problem during the day) then at night, we switch the freezer off and the freezer stays frozen until the morning. We also charge our computers during the day, and have the internet router going.

We don't currently have to wash clothes that much, but when we do we have to connect to the municipal power box outside our house, as the wattage on our washing machine trips the inverter. It's sad, but it also makes sense to use a washing machine for a couple more years. I guess we're trying to figure out how to tweak our lives without taking on so much we burn out: washing diapers by hand seems like a recipe for burnout.

During the building process, we also installed an instant hot water heater, to help us in the winter when we anticipate our solar heater will not give us very hot water. We thought hot showers in winter would be nice. But now we realise there is no way we have enough wattage, even in summer, to power the instant water heater. May others learn from our expensive mistake-- I'm guessing we'll either sell the water heater, or keep it in case we decide to set up a wind turbine sometime in the future.

Deep thought on electricity: typical appliances take up A LOT of energy, and solar is very expensive in comparison to the grid. But the relative efficiency of the municipal power seems to lead to crazy overuse and appliances that are really inefficient. Looking at our fridge and freezer, it may make more sense in the long term to get more efficient appliances or get used to not having cold stuff, rather than getting more batteries or more panels. But after spending so much on the house, we're trying to take a break from buying stuff.

First attempt at greywater recycling
For water, Eug and I set up one greywater (technically blackwater, but hey) system this past week. We still need to set up our rainwater tank to serve another part of our property. Theoretically, as different water sources benefit different sections of the plot, we'll start to effectively cover the whole plot. Also theoretically, our water needs will decline quite rapidly after three years. 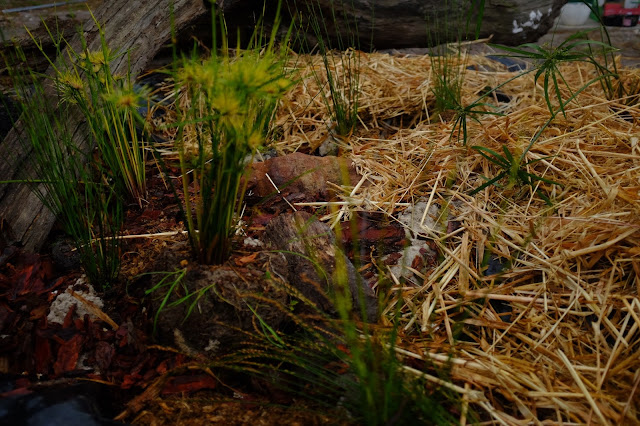 The greywater system we worked on this past week: I forgot to take photos as we worked, but it is a windy, gradually sloping river that takes our kitchen sink and washing machine water. The ditch is lined with plastic that had been left on the plot, followed by gravel and planted with reeds. Spaces between reeds are covered in thick mulch, to prevent standing water and risk of mosquitoes. After going through the reed bed, the water heads into a hugelkultur bed-- essentially large pieces of wood, covered by topsoil, and planted manure. That is, the water that leaves the system is meant to be absorbed into the branches of wood. We're not yet sure how long it will work for, and if we'll have to wash the rocks after a while, which will be a pain. We figure this is version 1.0, and that we'll re-evaluate after two years, or sooner if necessary. I think it's infinitely better than sending water directly underground, which is what we were doing previously.

Composting toilet
Our composting toilet is great. It doesn't smell, it's flexible, saves a huge amount of water, the kids are actually better at adding hay than they were at flushing the toilet. If you're here in Cape Town and this is something that you'd be interested in doing, or applying in NGO settings, I invite you to visit and check it out. Seriously. I know this is not the answer to all the world's problems, but I think it is a really great option for lots of people in lots of places.

We started to use our oat hay, which we have to cut to make the stalks easy to use as cover, but the good news is that even the oat hay is very effective at preventing odor. We're not using a huge amount, either. Buying hay- particularly at this time of year- greatly increases the cost of the toilet (though it's still cheaper than water/sewage costs), but the hay is absolutely a luxury. We knew it would be a learning curve for us, so we bought hay, but there is plenty of carbonaceous material around us that would be fine to use if we had the time to harvest it. When the autumn and winter comes, collecting a year's worth of cover material in the form of leaves will be doable. Leaves are bagged by the municipality and left on the pavement, so we're hoping this will be the only time we buy in cover material.

After less than a month in our house, our compost pile is already steaming. Following the Humanure Handbook, there's a thick layer of straw surrounding the newly added compost, and compost is always added to the center of the pile then covered well with hay/straw. Even so, flies are a potential nuisance, because we also add fruit scraps to the pile. This past week my dad gave me two bags of grass cuttings which we used to add extra cover to the pile. It's much more dense than the straw, and seemed to completely take care of the fly problem.

They may be proved right, but in a South African context getting free ANYTHING is pretty fantastic. Even woodchips (which we need for our sandy driveway) are super expensive (and not guaranteed to be pesticide free, either). So for the stage we're in, horse manure represents this amazing source of free fertility. Unlike organic and inorganic fertilizer, it's free and adds a lot of biomass, which is what we need on this sandy, hot and dry plot. I'm hoping that this will help our fruit trees get established and strong, so that they're gradually able to manage with fewer and fewer inputs of things like manure.

The other free resource that we're gradually making the most of is kelp from our nearby beaches. Full of trace minerals, we get a large bagful every time we head to the beach. They key to responsible foraging seems to be to take the seaweed that has washed up to shore (and so is no longer rooted), but is still wet (and thus hasn't lost too many nutrients).

Our house is not tiny, but it's smallish. (5mX9m, + a 2mX2m sunroom). So far, it's felt huge. As best as I can tell, this is because we're using our shipping container to store all the stuff we don't necessarily need to use daily-- our garden supplies, extra clothes, bulk food items. There isn't any wasted space, but we don't have lots of space to entertain guests or eat. We're hoping to get a folding dining table when we're in Korea, as this is what we always used in the U.S. The kids' bunk bed is a great space saver, though right now all the built-in storage is being used for hoarded rocks and stuff. oh well.