In July we found ourselves with a rooster who would not work for our flock. He was a bit of a jerk, perhaps due to our own measures of jerkiness, but still. He was also very small, and could not be the genetic future of our flock. Someone had a very large rooster (Boschvolder X Potchefstroom koekoek) that they were getting rid of, but first we had to say goodbye to Bruce... the whole process took a while (killing-scalding-plucking-eviscerating), and I cannot imagine us doing it more than once in a while. Eating him was a new experience for me. This month I had to kill a rat, and an injured mole rat. I didn't feel like we had much choice in either case. The rat was not going to join my favourite NGO, and sending rats over to neighbours seems like a bad idea. I did feed it to the chickens, at least. So anyway, it was a big month in the world of taking animal lives. Not enjoyable, but somehow this-- eating stuff, killing stuff-- is the way the world works in some deep way, and it'll make total sense one day in heaven.

[Okay, so now you can skip over while I preach about stuff I know little about (and carefully avoid the fact that it was Eug, not I, who did the actual slaughter): After some years as a vegetarian, I've come to terms with eating some meat, as chickens and/or ducks seem to be integral to a/our farm. I want to eat meat that I have killed myself, for many reasons. One of which is that I think this is where our high wages should not mean that we get to hide what we are eating by paying someone (very little) to face things we cannot, or to do the hard work of raising food. I think of myself differently when I am spending time to figure out some of the many needs I tend to pay to have fulfilled (petrol, solar, food, water). ] 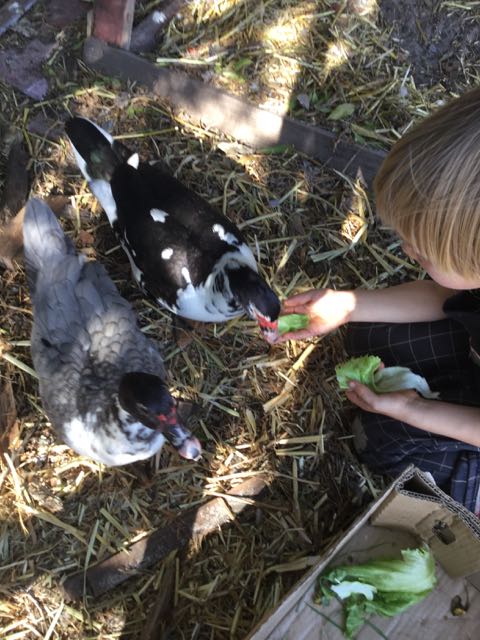 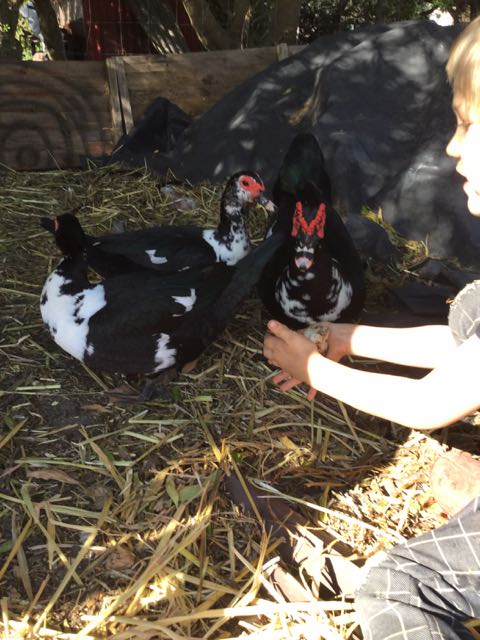 Letting Hana roam a bit with the boys, while I dig a hole or mulch or haul compost... feels like good work. The landscaping waste is starting to show real benefits-- and the chickens get a fair amount of food digging through it. We also still get a box of leftover produce from a farmstand nearby. It keeps us in vegetables for the week, and allows us to greatly reduce our feed costs. And we have had a lot of rain the last couple of weeks. Our reservoir is starting to be pretty full, though I don't really have a plan how to use the water over the summer...