Our street seems poised to change from primarily rural to... we're not quite sure what. So as a psychological exercise, I thought I'd write down some of my thoughts here. Our fears are rooted in the recognition that for all our dreaming, work and building, the day-to-day stuff we can't control-- whether we get in trouble for our crazy rooster and the building material constantly piling up, whether there's bike-killing traffic, whether your kids can safely go down the street-- can start to crowd out other stuff. We have neighbours who once farmed in other parts of Cape Town, and had to leave their farms because of safety -- and where daily theft forced them to stop farming, and that is also something that is on my mind. Change can feel as though the dreams we've cultivated are tenuous somehow, that they can be taken away quite rapidly.

Which made me consider the dreams themselves. As we moved to the farm we stepped onto a particular path, not just into a particular space. The space seems deeply important-- not only our house but also our fruit trees and the work I've put into the soil. Yet what's perhaps surprising is the number of things we can take with us if we ever have to leave: we're learning and internalizing ideas and lessons about growing food, bringing up our kids, being sortof-off-grid. Year-to-year, there'll be more things that tie us to this place and there'll also be ways in which the land is giving to us gifts in the here and now, in which we don't have to worry about the future.

A friend asked if I stopped blogging regularly because all our dreams of farming or unschooling or working at stuff we enjoyed were already fulfilled, and I was thinking about how it doesn't feel like that for me-- there's constant space for growth.* It feels like over the next ten or twenty years, we can continuously create a more beautiful productive space, but each year we learn stuff, and we change whether or not that beautiful space in my mind ultimately comes to be. And each year, there are things that do well and things that fail-- things that the kids love about being here, things that they don't love.

Ultimately, this farm, and now the nursery, is under our stewardship for as long as it is given to us (we hope for a good long time-- don't worry mom!), but I don't want to feel aggressively protective of it-- I want to hold on loosely, even if it goes against my controlling personality. Maybe that's where accumulation of property or money is particularly problematic-- they become markers that signal whether our lives are going well or poorly.

In the long-term, I hope we can be progressively more radical in our understanding of growth, as these outward measures don't speak to growth in our ability to communicate, our ability to know our own heart, our ability to convey kindness, to relate to those close to us in a non-manipulative way. All these things are not things that we are born with, even if we are "kind", there are different kindnesses for different circumstances.


All roads lead to vegetable gardening
These days, I spend a lot of my time thinking about vegetables. I've been growing vegetables-- at least a little bit-- since I started this blog ten or eleven years ago. For a while, I gardened on our fire escape in the summers in Boston-- probably in contravention of fire code. For a while in Observatory, Cape Town, I was all about urban gardening in a very small space. Then I got really discouraged about the difficulties of how little we produced. For the last two or so years, we've been on our 1-acre smallholding, but the first year or so I did very little vegetable gardening because our hugelbeds were not mature enough and our water access presented real challenges.

This year, I've been thinking a lot about our own vegetable garden, as well as about two school vegetable gardens (one for a preschool, another for a primary school) and also about creating a market garden at our nursery.

All in all, this has involved a lot of planning and a lot of gardening relative to previous years. Absolutely NOT all successful, but still, a lot of food produced. As with everything, gardening is an exercise in grappling with control-- doing what you can, knowing what is in the realm of possibility, and leaving some stuff alone. What I'm learning is that there are a lot of ways to garden successfully, and that just trying lots of different stuff, and being willing (and lets be honest, having the time, money and energy) to keep trying eventually leads you to good things. So it's just worth just trying.

I re-read Fukuoka's work recently (and also went down the rabbit hole of Korean Natural Farming), and what struck me in re-reading was not the techniques, but the journey. I'm convinced by the idea of working with nature rather than against it, but I think the process of figuring that out for each space is actually quite winding and indirect.

When I feel discouraged, as though growing on this scale is not efficient or that I kill too many plants, I think it's valuable to remember that most of the world's food is produced by smallholder farmers, on a very small amount of land. Large scale agriculture is what is inefficient and unsustainable. We often get fed a message that big farmers feed the world, but that is not true. While I don't really believe the average person can grow all their vegetables on a space the size of a door, just because a lot urban agriculture pinterest boards are not terribly realistic doesn't mean you can't grow a lot in a small space, over time, once you get to know your conditions and adapt to fit your circumstances. [I also think that it is meat and dairy-based diets that need larger farms, as this is where I have found it hardest, and most inefficient, to figure out how to be self-sufficient].

When I produce yucky tomatoes, I can cut the bad bits out, give them to the chickens or ducks or pig or worms, and eat the rest. When large scale farmers produces yucky tomatoes (and I'm convinced if you're gardening completely organically, you'll always have quite a lot of not-up-to-standard tomatoes) their options are much more limited, so the pressure to produce good looking tomatoes, at whatever environmental cost, is so much higher.

On our farm, as I plan better for the future, I begin to see a way to produce all our vegetables and fruit and quite a few of our calorie crops pretty efficiently. Not all our calories, by any means, but a lot of food nevertheless, and we're creeping up calorie wise. At the school garden, suddenly it doesn't take much to produce all the greens needed for two schools for lunch for 160 kids, even if we can't produce a lot of other items just yet.

Propagation by cuttings
With the weather cooling down, it feels like we finally emerged on the other side of a very hard summer. Some of our nursery stock died, some survived. On the other side, I've learned about cuttings. I even have a pair of secateurs in the car, in my bag, or even in my pocket, to whip out if someone has something nice sticking out over their fence... My kids are a mixture of embarrassed and totally into it.


My parents' house: Connecting to the grid
We're looking forward to having my parents living with us on the farm, hopefully later this year. After six months of waiting, we thought our building plans for my parents little house were close to being approved, but not yet. It's been a really long and painful process.

So, you ask, will my parents house be off-grid? Will it be built with mud and hay? Sandbags? Tires?No, sadly none of the above. We did pursue the possibility of building with sandbags but we weren't successful -- the combination of expertise, availability, affordability and council approval is pretty challenging to get right. I hope if we ever build another structure, I hope it will be something exciting and fun (TIRES-- earthships-- are still my favourite), but this time around we feel ok about building small, but pretty conventionally.

On being off-grid-- sortof. We'll going to have many of the things we have at our house that only increase our standard of living (consider this the definitive list of things that won't significantly impact on your happiness): (1) low-pressure Solar geyser (water heater) on the roof, (2) household water going out to greywater systems-- moringa trees and banana trees, hopefully, (3) rainwater tanks (4) composting bucket toilet.

So I guess the main thing that isn't on there is our PV solar panels. Having those, rather than municipal electricity, does significantly impact our standard of living (no fridge or booster for the geyser on the roof, so sometimes no hot water) and we're pretty sure we're messing up our battery because in winter we sometimes want to use our computers at night.

Anyway, I'm still really excited to be hopefully close to building my parents' house, and also to growing a lot of stuff on their corner of the property-- I haven't grown anything there because we knew their house would be coming, but once their house is up we'll be growing a lot more. 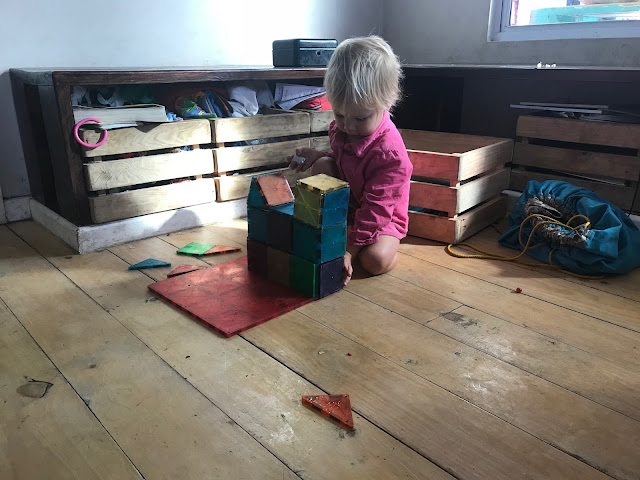 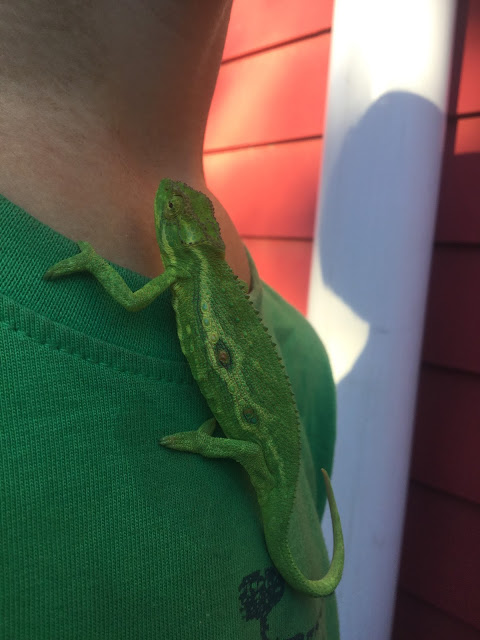 *I slowed down blogging because I figure there's enough content out there on elimination communication (replace with any hippie topic), and I don't care enough to evangelize on any one life choice. I also decided around the same time that I didn't want to monetize the blog.