May update & reflections on homeschooling

Until pretty recently, public school was quite an important part of what I believed in-- it lent itself to images of some level of socioeconomic equality, whereas homeschooling evokes images of elitism, unnatural cloistering, or religious conservatism. Those images don't necessarily fit with what public schooling or homeschooling actually looks like in South Africa (or anywhere)-- at least the parts of South Africa I've lived in. Bad public schools offer virtually no social mobility for those living below the poverty line, and at worst are akin to prisons, whereas elite public schools are, well, elite. A school leaving certificate is seen as a major tool for making ones' way in the world, which I'm not sure is really the case. And the middle ground is so hard to find.

So part of the choice to homeschool has evolved out of the extraordinarily complex choices facing parents in South Africa: private or public? How diverse? How good is good enough? A lot of times this complex choice is framed in terms of our children's long-term futures-- we want to do the best we can to get our kids to whatever adulthood we perceive as ideal.The thing is, when we make a choice about school we're also making a pretty massive choice about our lives in the present, and that's even more difficult: Do we spend more time at work, or have a more demanding job, in order to send our children to better schools? Do we find a public school that's pretty good, but then subject ourselves to 2 hours in a car each day? Do we move to stand a better chance of getting into a "good" school? I don't know the answers to these questions in any kind of universal way, but it's this cascade of decisions that we're consciously sidestepping when we're choosing to homeschool.

When I imagine the broader social consequences of homeschooling I have two main responses 1) Our lives are small and our intentions in homeschooling our kids comes from a place of hopefulness, prayer (often for our small lives to form part of some bigger story), and thoughtful consideration 2) Maybe small cottage schools and home schools would positively, rather than negatively affect the education of many South Africans living below the poverty line.

In these updates, I mainly focus on what we're actually doing. Not because we're doing something special, but to keep a record for ourselves and demystify some of the day-to-day stuff, for others. That said, we don't take pictures of the kids crying or running away when we set lunch on the table. So it's a skew picture, often with idealized bits of what we're hoping for rather than the full picture of the day. Looking back, it's also clear that some things are going really, really well, which is sometimes difficult to see when one is still hearing cries almost every day.

This month I was inspired by Thomas Jefferson Education. Occasionally I want to have something tangible to show for our days -- like the kids starting to read or count better. But I'm sold on the idea that these early years are primarily about building a good foundation relationally, and providing the kids with lots of good stories.

We used this instructable (somewhat flexibly) to make a solar oven. It was a fun project that the kids got super engaged in-- though it'll be even better when we find out if it works. I didn't fully think through doing this in winter. 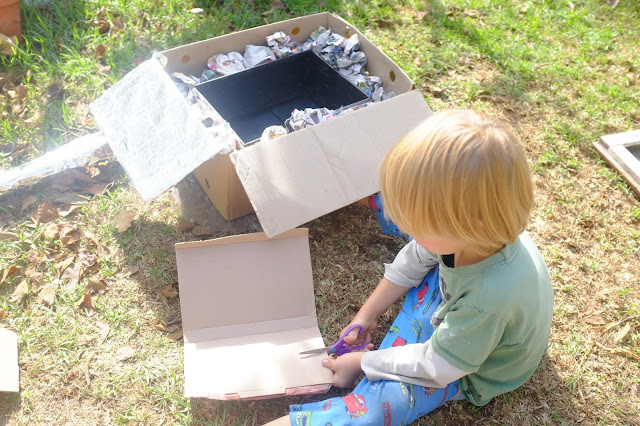 Craft time
I've finally embraced craft time, and it's been a very helpful transition for me. Planning seems to make all the difference. The kids are super keen to try new things at particular times of day. A couple of blogs have suggested that art is sometimes less rushed early in the day (including a favourite South African-based blog, www.se7en.org.za) so that's what we've been trying out-- though haphazardly-- this month. For Eli, this is often cutting and doing stuff with stickers. For Noah, it's more likely to be weaving, colouring or drawing. The kids have a small table here at my parents' house, but I find that sitting together at the big table is a lot better, as I can do something with them and there's lots of space.

In the kids' birthday package were also these small Japanese building blocks, called Laq. They're a lot more compact than legos (yippee!!!), have only a small variety of blocks so if you lose one it's less of a crisis than with legos (yippee!!) and they build slightly different kinds of things-- including different angles etc. After a frustrating morning feeling like I was back in organic chemistry, I'm now a huge fan. Following the paper instructions is pretty difficult (more difficult than with legos) but using the blocks gets super fun because of the options created by 45 degree and 30 degree angles. 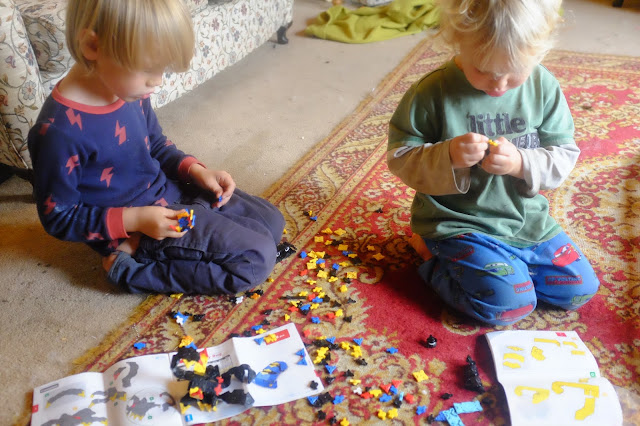 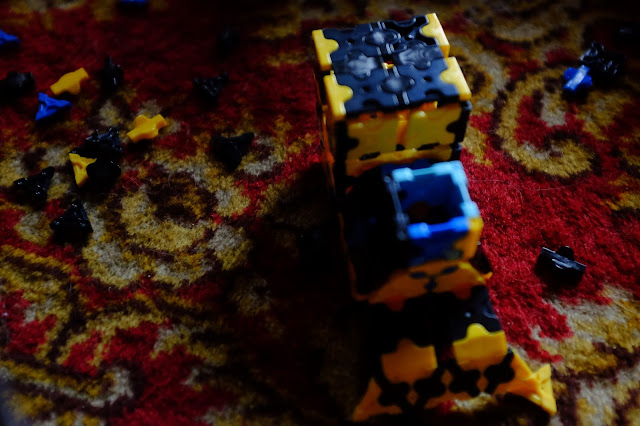 iPad reading
This month we were gifted my mom's old iPad. So we also dropped speech therapy in favour of a couple of iPad reading programmes. Unlike speech therapy, which the kids did for the chocolate, the reading programmes they do for love (iPad love). It also helps with speech-- to discover the sounds that go with specific letters or words helps Noah to understand the words that he typically mixes up. The two apps the kids have really enjoyed are Endless Reader and Joy of Reading. They have different strengths, and together seem to have helped the kids progress in word and sound recognition. Of course, we still spend a lot of time reading to them. To be honest, I'm hoping that Noah is reading somewhat independently before our baby girl is born in September. It's not necessarily a reasonable goal, so I'm saying it to you rather than to him, and trying to hold it lightly. Progress over perfection (on my part), who cares if Noah reads now or in a couple of years time. Well, I do, but that's my own issue.

Otherwise, our attempt at a schedule seems to make the kids feel safe. They do a fair amount of baking and cooking (in which I try not to have a heart attack, so no pictures), time at our plot (I keep on forgetting the camera) and lots of playing. It's getting pretty cold and rainy here, so I'm excited at the prospects of fires and a sense of security and rhythm here, in my parents' home.