Beginning a permaculture farm, and building a house in Cape Town

I haven't used the phrase "permaculture forest" much in my descriptions of what we're doing on our plot, but for about half the plot, that's probably the best term for what we're attempting. At the same time, having killed many a plant following the latest farming theory, I'm hesitant to follow a set of principles as dogma. We're attempting pretty close spacing of trees, together with mulch and support species, and seeing how they grow. We have one acre total (4100m2), and in this space there'll be two small houses (one for my parents, one for us), and a shipping container (which we will be converting into housing for Eug's mom and brother, and for storage/guests when they're not staying).


On the building side: Building a house is really hard, even though we're not actually the ones building it. We want control and a sense that we're being good stewards with our resources (we also don't want to run out of money), but we're beginners and we don't really know much. And we're working and living about a 30 minute drive away from the farm with our two small kids. The house is very small (36m2, or 387sqft on the ground floor, plus a loft space of about 120sqft which will be the adult's bedroom one day, when the kids stop sleeping over). It's a little difficult to imagine living in this house with three growing kids, but most of the world occupies much smaller, less fancy spaces. My prayer, coming from a place of stress, is "what would it take for building to be a good process?" And usually the answer God gives is along the lines of remembering that the house itself is a gift, not proportional to any kind of work we've done, and that perhaps it could also be a blessing to those doing the building. We've also had some pretty fun encounters buying second hand stuff for the house (a few doors, a spiral staircase, a bathtub, wood flooring) from interesting people. Eug, who swore his career sanding, staining and varnishing was coming to an end when we finished renovating our old house, has been doing just that with old doors and stairs. I'm very lucky and grateful. 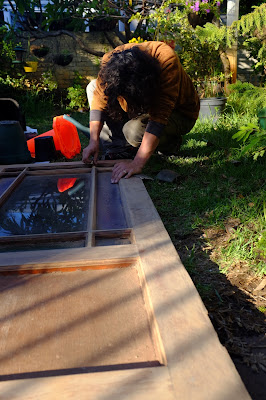 On the farming side:

Both houses on the plot will be one bedroom cottages with lofts, so they don't take up a huge amount of space- less than 1/8 acre with some space between them for my parents' dogs to roam. Still, with a small pond (or the cement structure for a pool that came with the property), a few vegetable beds, as well as chickens and ducks, greywater systems, water storage tanks and medium-scale composting, the space gets used up pretty fast. Getting dairy animals does not seem to be a practical use of space, at least for now. So, despite my voracious appetite for goat care manuals, goat ownership fits in the "not in the next five years" category. While we could buy all or most of our animals' food, and therefore keep them in a smaller space, I'm not sure that's a great idea for us. The significant costs of land -- the costs of ownership and the cost of purchase, as well as the opportunity costs of not growing fruits and vegetables -- would also make those animal products extraordinarily expensive.

It seems like chickens, ducks (muscovies) and bees (and maybe fish-- tilapia) are a good use of space and well-suited to the cost and relatively poor current state of our land, as well as to the climate. The chickens and ducks will ultimately be able to roam free in the forest once the trees are mature (perhaps in five years' time). I'm still considering whether raising a couple of pigs every year for meat might be workable, if we can find a good butcher to help us.

Given the years it takes trees to grow and bear fruit, we've been focused on starting a food forest. The goal is to get as close to a self-sustaining forest as possible, with various layers of foods and support crops (most notably nitrogen fixers and stuff that quickly accumulates biomass for us to chop and drop onto the forest floor). Food forests are a bit of a fad, at least in the online world that I'm exposed to, often involving certification, designers, large earth moving equipment and surveying instruments to figure out how to catch water along contour. We don't have easy access to that stuff. So instead we're looking at the land as best we can and thinking of how to catch and retain water, increase the amount of biomass, and plant trees in an micro-environment that most suits them. When I am less pregnant, or Eug is less busy sanding and painting things, we will dig ditches by hand to catch water.

In Cape Town, there's a lot that potentially grows very well, because we don't have frost (except perhaps on the mountains) and there's plenty of sun. We're less able to grow things that require a certain number of cold hours per year, or which don't tolerate the months of heat of drought-- such as apples or walnuts-- but there are even varieties of apple that can do ok our climate. It's even possible to grow tropical fruits, if they're well-placed in a warm, protected spot. On the other hand, our soil looks a lot like sandpit sand, so there's a ways to go before trees will be healthy and thrive here without any help.

Theoretically, it would be great to completely oversupply fruit trees and support species to the half acre, then see what does well as they grow to maturity, chopping the rest for mulch and firewood. In practice, it takes a long time to plant trees well, and it's hard to see trees grown from seed succumb to guinea fowl or giant moles or roaming chickens. Grafted trees cost between R70 and R300 (US$6 to US27) at the nursery, so we've been slow to buy the more expensive trees-- we don't want to waste them! I've also been sowing quite a lot of nitrogen fixing tree seed that I've collected while biking around.
So far we have pomegranate, acacia (siberiana and xanthophloea), moringa, pawpaw (papaya), cape gooseberry, goji berry, almond, granadilla, hanepoort grape, pineapples, seedling avocado, seedling mango, lemon, peach, guavas, elderberries, prickly pears, macadamia nut, a few olives (already there), sweet potato and spekboom. Waiting at my parents' house in Plumstead we have a fig, more pomegranate, some more small nitrogen fixer tree seedlings, tamarillo, blueberry, orange, apricot, plum, more peach, more lemon, more pawpaws, many more grapes.
Once we're on the plot we'll buy or grow from seed/cutting blueberries, granadilla, rasberries, grapefruit, Natal plum (num nums), kei apple/wild apricot, more spekboom, marula, more orange trees, naartjies, bananas, coffee, persimmon, more macadamia,  cultivated mulberry and many more support species. A friend has gifted me with lots of native seeds received from Kirstenbosch, including edible natives, that I'm going to try and cultivate.
The dreaded acacia saligna (port jackson) is currently the main support species/nitrogen fixer on the plot, as it was there before we arrived and I've been coppicing them rather than trying to pull them out completely. They're deeply hated here in the Cape, but on our plot it takes me about 2 hours to cut all of the port jackson shrubs down to ground level-- the wood is soft and very easy to saw through. I guiltily admit I love them-- while everything else was struggling to survive over the dry, hot, summer, the port jackson thrived. Which I guess is why they're a problem to native habitat. Coppicing them seems like an good investment of time every few months, particularly given all the leaves and branches we get in return. We're careful not to let them go to seed, so there's not too much danger of our choices affecting our neighbours. We're also on the lookout for a few tons of (probably horse) manure, leaves and grass cuttings to cover and build the sandy ground.

Whew. So starting out is a slow and demanding process. But the goal is so exciting: an off-grid* home with a resilient and quite prolific food system that requires little outside water or other inputs. From a more abstract/idealistic perspective, I love the idea of leaving a piece of land in great condition, and of feeding our boys on food produced right where we live.

If you're trying permaculture here in Cape Town, or have some edible perennials in need of a home, please do let me know! We'd love your wisdom. And if you're the praying type, please could you pray that our builders do a great job, and we're able to move in and settle down before the baby comes.

*sortof- we'll be connected to the municipality's water supply for emergencies/drinking water.

This is so cool! I am amazed at all of the projects you undertake!! I look forward to seeing how the farm and the house progress! We missed you at Reunion a couple weeks ago! <3!