Our fellow workers on the farm are confronted by endless work, lack of tools, seed, lack of variety and stimulus in their daily work. They are indeed leading a hard life and a poor life. But they are trying to rebuild within the shell of the old, a new society, wherein the dignity and freedom and responsibility of man is emphasized. And there is no place better to do it than on the land. (The Catholic Worker, October, 1939)

One of the most important and growing costs of the modern way of life is ‘cultural fraud’: the promotion of images and ideals of ‘the good life’ that serve the economy but do not meet psychological needs, nor reflect social realities. (Richard Eckersley)

We've been living on our farm for over 2.5 years now, so I'm thinking again about what we do and don't grow here, and what our lives are like. It's not 1939, and we're not living communally, but the Catholic Worker movement does provide inspiration, and also speaks to the challenges of trying to produce our own food. The lines between producing poorly and producing "well" are fuzzy, and figuring out how to make our small, 1 acre farm more productive is as much about good stewardship given highly contested (and scarce) city land as it is about a romantic idea of feeding ourselves. I also list out foods to make food more visible, and the processes of growing (and not growing) less abstract. 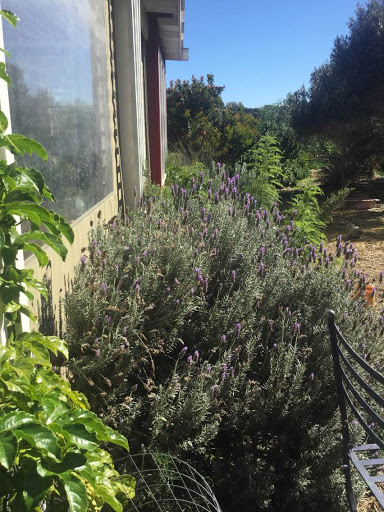 It's still early days in the life of our farm. Also, our story is definitely the story of part-time farmers who support ourselves through off-farm work, and who struggle to find the time to farm. Still, I'm coming to think that a lot of descriptions about how difficult and expensive it is to become more self-sufficient in food emerges from early (in)experience, bad farming conditions and running out of energy or money too early on. I'm still very inexperienced, of course, and one cannot quickly change one's farm environment (our sand is not going away any time soon), but eventually things start to shift. The soil starts to get better. There are a few successes. So my farming motto, if I had one, might involve the word "persistence," and be about not taking these few years of unusual drought as proof that (urban) farming isn't efficient, doesn't "work," or is too difficult. It can be very efficient, but only if you have a lot of margin to survive inevitable failures-- every farm is different and so even if you are very experienced, I imagine it takes some time to acclimate. As a side note, I think this means that if policy were to better support farmers (urban and rural), it might involve providing greater margin (financial and in terms of time) to survive early failures (and more time to build up the soil and infrastructure slowly so that a farmer really understands what systems they're adding and why, and how to fix them if things aren't right).

Vegetables
We still buy big bags of potatoes and onions, which are staple items for us, but we produce most other vegetables (I'm afraid to say that on the internet, as we're always one chicken invasion away from disaster). This year, my plan for the garden includes (weather and pest permitting) a large crop of garlic, sweet potatoes, potatoes and onions, enough tomatoes to preserve for the year. I can't really calculate the calories on the vegetables we produce, but despite the drought we eat greens a few times a week (I know it should be every day), produced a pretty good crop of squashes, pumpkins and tomatoes, and are still getting a lot of peppers, eggplant and cape gooseberries from our lingering summer crop.

Fruit
We're close to getting a lot of fruits and should produce enough fruit for our family's consumption, and possibly more than enough, in about 2 years, but for the most part we still buy fruit as our trees are taking a while to mature-- not helped by the drought! We got some peaches, some apricots and blackberries this past summer, have a fairly continuous supply of gooseberries we eat every day, and have a large crop of tamarillos (currently), guavas (still ripening), and bananas (still ripening) and granadillas/guavadillas are finally on their way. We're hoping next year we'll start to harvest some citrus, pomegranates, almonds, figs and plums. Then in another couple of years we'll get much more citrus and nectarines, apples and pears.

Oil
Our trees produced a lot of olives this year, and we tried to make olive olive oil with our Piteba press, with disastrous results (Hana mercifully overturned the "olive oil," so we didn't have to actually make the decision whether to use it or not). We're going to try peanut oil rather, then work our way back up to olive oil... So we're going to be buying in oil (or at least nuts) for a good while. We were able to give away some olives to friends so at least they weren't wasted.

Honey
Thanks to my dad and our three hives, we're suddenly in a position to stop buying sugar. My dad did not take honey from the bees over the summer at all, because both of our two hives had swarmed (I managed to catch one but not the other). It's not that sugar was exactly eating away at our food budget, but having a row of honey jars on the shelf feels wonderful.

If we need to get about 3 million calories per year as a family, the amount of honey we produce is significant-- if we ate most of our honey ourselves we could get over 10% of our calories from honey produced by 3 hives.


Eggs
Not counting our duck eggs (which come and go depending how well they hide them), we consume about 500 calories a day from eggs-- and could probably consume more, when we include duck eggs. Again, this could be up to 10% of our calories as a family.


Anyway, so what's the plan for the future?
Buying in the short term but hope to stop buying in a few years time
Still buying in the long term?
*Although I don't have any definite plans to produce any of these things ourselves, I am still dreaming about getting a few dairy goats (Nigerian dwarf gots), maybe in three years' time, especially if I can organize enough organic waste from landscapers to offset their feed.

My point in making this list is just to admit that we're not trying to produce everything, and that independence from industrial food takes a lot of time and effort. If one wants to maintain a decent standard of living in the in-between, the industrial food system is actually what makes the transition possible-- knowing that I can go and grab crappy ice cream, for example, is sometimes what gives me the self-control to cook lentils. In fact, the bottom five things on that list that are mainly imported, most notably oats, which we eat daily (usually from Australia or Germany), short grain brown rice (usually from the USA), which we eat  couple of times a week, and peanuts (usually from China)/peanut butter. In the future, it may be that we actively work to make some of these things become less important in our diet so that we can rely even more on food grown on the farm, or it may be that other life adjustments take priority. We would like to keep improving the productivity of the farm, but at a certain point that could mean selling or giving away food, and spending more time reflecting and sharing how our farm fits into broader food movements, rather than endlessly adding diversity.


The challenge of envisioning real utopias is to elaborate clear-headed, rigorous, and viable alternatives to existing social institutions that both embody our deepest aspirations for human flourishing and take seriously the problem of practical design. Real utopias capture the spirit of utopia but remain attentive to what it takes to bring those aspirations to life. What we want are utopian destinations which, even if they are themselves unreachable, nevertheless have accessible waystations that help move us in the right direction. (Erik Olin Wright)

The hard thing is remembering that although there's an endless list of things to do, the projects must be paced somehow, and daily life/work should not have to wait. There will never be a time when the farm is complete. There's also no such thing as a perfect diet or a perfect farm; it seems to be all about learning what to try and when, for our unique context, and not going too crazy in the attempt.