On working and owning land in urban South Africa 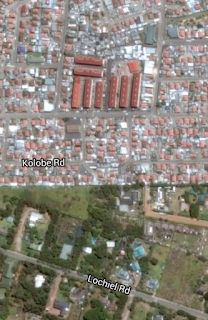 Now and then, we see the land invasion trucks, accompanied by police trucks, hurtling down the street to stop a shack from being built further into the wetlands. Occasionally, like this morning, we wake up in the morning and we hear a surge of hundreds of voices— sometimes singing, sometimes angry and shouting. Less frequently, thankfully, we hear the noise of rubber bullets and water cannons or smell the smoke of tires burning. It always feels very close. Our fence is just diamond mesh, after all— no electric current, no solid wall. Transparent. (admittedly with lots of baby spiky plants as a token of our security intentions)

Most of the time, our farm is peaceful and quiet. I watch the chickens scratching and try to resist the temptation to plant more seeds while I’m supposed to be writing or studying or reading a student's work.

When people look at the map, or when friends visit from Masi, they sometimes say “hey! Eug and Jo have a farm and lots of land right next to a township where people are suffering and squashed together. There’s something wrong with this picture!” And they would be right.

We might reply “we bought this land for a fair price, and we could have bought better land, in a more convenient and safe place, more cheaply. We are working for good things for this community and neighborhood.” That would be true, also.

From the limitations of this, my one perspective, I’m convinced that part of the solution to this, a seemingly impossible problem, is: We should actively seek out the lowest standard of living that our happiness allows for (and, to the extent of our influence, seek out policies that do the same). Wealth only increases happiness until our essentials are covered, right? Yet it feels never-ending. When taxes increase, or you face unemployment, you should still be able to pay fair wages to everyone who supplies you with goods or services (this follows up the entire chain, not just those directly employed by you: it includes the person in Malaysia who made your child’s hotwheel car… something that I haven’t quite figured out yet). We should aspire to lives that do not take (or even 'earn') more than our fair share, which is terribly difficult if you have access to so much stuff, but which can be a progressive, gradual set of choices.

We should strive to produce as much as we can, or at least understand the world from the perspective of the producer. Not the manager of the factory understanding the supply chain, but the person actually sowing a seed or sewing a garment. My perspective has changed so much with each dead animal or failed crop, and it is so painful when I hear a customer at our nursery complain about our price increase from R10 to R12 ($1) for a plant, knowing how difficult it was to grow it.

Capital is concentrated in the top end of consumption chains, and when I see my peers I think part of this picture is that we’re so busy, and we’re literally the beneficiaries of capitalism— we have higher degrees and responsible jobs and are trying to cobble together enough childcare to raise our children well. We’re probably a bit stressed a lot of the time because we think perfection is somehow within our grasp (and if you are in the U.S. you may be stuck with a lot of debt).

Our land is just starting to become productive after being vacant for over five years. The past few years we have been working harder than is sustainable, because I feel so much weight of responsibility to use our land wisely. Yet if you saw our land, you might (rightly) cast it as under-utilized. Give us some time. Utility should not be measured just by economic productivity or human density, it should be measured in terms of values, perhaps (in the case of land) in terms of the depth and strength of commitment to make a space ecologically productive over many years.

I guess my point is that when it comes to land, farmers must have the margin to take the long view and set up farm systems carefully and wisely (not just in a day and a rototiller). Specifically, if financially we'd had to make the whole acre productive right away, we would have made choices-- rapid clearing that would likely have made the soil worse, paying people marginal salaries to help us. There is land all over South Africa that has the capacity to become sustainably productive, given the right resources and better economic policy, but it takes time (longer than a political term) and care and is often a thankless task, though you would be right to argue that parts of SA have a much better climate for some kinds of farming than Cape Town.

Despite the challenges, when it comes to small farms, I am all in. For health, productivity, and sustainability in the context of climate change: small farms are vital, even within city limits and even in the context of densely populated settlements. For vegetable production in a city like Cape Town (with year-round growing): we should be growing our vegetables within city limits.

For those who arrive from the Eastern Cape to Cape Town, trying to get enough money to educate their children and improve things for themselves: people who live in zinc shacks and do domestic work: where so often the employer sees themselves as magnanimous and the employee furtively thanks them for the hard manual labour they have received. In academic conversations, to talk about expanding options for farming in the Eastern Cape is seen as insulting (why would they want to farm? why should they not have access to the city!?) and shortsighted (people are coming, cities are the inevitable future) at best.

Yet in saying that the options for farming should be expanded and supported I do not mean that anyone should be excluded from the city, or that cities should not grow in proportion to population growth. I mean that farms should be getting smaller and more people working smaller pieces of land, not larger, that food supply chains can and should be shorter, and that mechanization has harmed our food system in significant ways. Of course, mechanization has also benefited our food system: Threshing wheat or grinding corn are unromantic tasks that I am loath to take on. Yet the point where ecological forms of land management and continuous soil improvement become impossible, farming has become unsustainable— at that point farms have become too large.

So, we should have pathways and tools to farm on large enough pieces of land for subsistence (I have read, and experienced, that 1 acre is a full time job for 1 person), and we should receive the extension services and support for this to be a viable, dignified option, so that farming is not something you run from the first opportunity you get. One should have the capacity to live a dignified (nourished) life on even marginal farm land, improving that land and making it more productive.

For those of us who are not farming, there should be ways to live simply, to produce at least some of one’s food, and not outsource jobs that are too dirty and uncomfortable (unless they are outsourcing with a good, livable wage). We should not leverage our super-educated brains for maximum money, as others leverage their bodies to produce our food, build our houses, sew our clothes and care for our children. (I may not yet have the words or tone to express this idea as anything other than a tired, opinionated rewriting of Marxism. But I will get there one day!)

The back to the land movement should not be just a super upper class thing (yet it should also not be a thing that we tell the poor to do). This is not River Cottage. As societies, we should prioritize understanding the basics of what it means to sustain ourselves: from what it takes to build a structure, to what it takes to grow our food. We are poorer for not knowing. I have heard activists in the city say proudly that they are not land owners… they are able to move freely and they are not taking land from anyone. Yet we all put their money in a bank somewhere (and that bank uses their money to buy shares in companies, which buy up land) we buy things, many of us travel, and we all eat, and in that way we are all using land somewhere. Owning land, and farming it, incurs responsibility and a depth of attachment (and moral ambiguity) that is altogether different from buying more responsibly at the farmer’s market. That is not to say one is only moral if one is farming/producing, but that our moral responsibilities are enacted in many different ways, even in a place like South Africa where access to land is deeply contested.  Perhaps part of imagining a different world is to realize that parts of our existence are in grey areas, our perspectives limited, and that we moving through the world imperfectly (whether farming or not).