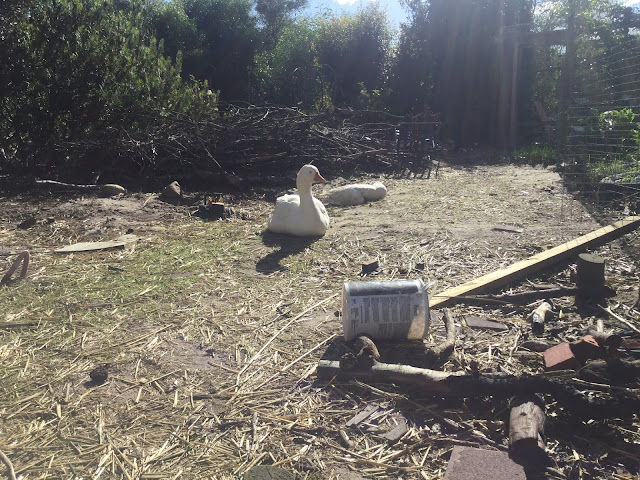 Our male goose passed away a few days ago. He's been ill for a long time, ever since he had a stroke in December. Our female goose keeps calling for him. There's something very poignant about the sadness of a goose losing it's mate. We'd been nursing the male goose for 6 months... Carrying him in and out of the kiddie pool, feeding him by hand at times. I feel sad because winter suddenly set in and I didn't think to bring the goose into our house until it was too late, and maybe he could have had longer.

Then I wonder how it happened that I am bringing a full grown goose into the house to lie down in front of the fire. Caring for this goose even after we knew that he and his mate would probably never give us eggs or meat-- it brought me back to the economics of farming. The economics of our farm often don't add up. As pressed for time as we are in this season of our lives, to spend time on a dying goose verges on absurdity. As you may guess if you've read a few posts, I go between painstakingly calculating our costs (time and money, time is money??) and outputs to convince you that farming is a great idea, and giving up on the economic value. (and of course, you might just say the geese have ended up as pets, which I suppose is also true) I focus on the frugality of farming because I don't think it is enough for people who love farming to farm... maybe it is, or maybe more people will grow to love farming as the world shifts and shifts again?

I grew up in evangelical settings where we had to not only be sure and right and have all the answers, but we also had to convince everyone else we had what they were missing. So bear with me when I do that, it's a habit that is hard to break. Part of our urban farming efforts began as entirely evangelical (YOU MUST ALL FARM) but farming has a way of messing with one's sense of certainty and control. There is a world of wonder and contradiction on our farm, where you don't get away from money (for example, our animal feed costs more than eggs would, though we can sometimes sell ducks or chicks, our financial benefits are very haphazard and fuzzy) and yet-- perhaps only if you have the financial margin to do so-- we do find ourselves emerging from that hard logic of economics. We edge away from supply and demand thinking, in the sense that money gradually gets less important. Of course, we've had to do a lot of work, and a lot of careful saving, in the context of a cutthroat capitalist economy to get where we are-- i.e. no mortgage and student loan debt etc. Habits are very hard to break. But I hope one day money will factor much less in my life than it does now, and there's some tentative evidence that this is possible-- not because we're so rich money doesn't matter, but because we're not measuring everything in those terms, or buying much from the monied economy. We're not going to live without money, and we're owners of stuff, but our relationship with money has shifted a lot already, and I think it'll shift a lot more.

As we produce more, money becomes a tool for fewer things, and we get more resourceful. But it's more than that; it is gradually less important to measure value in terms of money, or to measure at all. Even though I am stuck in my head so much, as part of working within a university structure, I am stuck in my head much less than I used to be, because there are so many chores to be done and little kids to be cared for. I like it.