Snapshots of Politics in real Life

I have been following four country's elections the past weeks: the ANC, the caucus in Iowa, the Kenyan elections, and the Pakistani elections. It would be great to hear your perspectives because mine is limited. I'm really interested in how all these elections-- past, present, future-- impact individuals and communities around the world in the most basic and fundamental ways. Politics really matters.

South Africa: from loyalty to the movement to a new kind of politics. I believe that Zuma's election sends the signal that people will not simply follow along if they feel they are being ignored (as seemed to be the case with Mbeki). 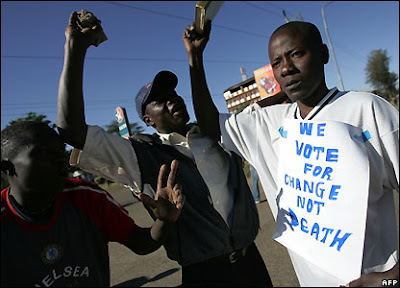 Kenya: Ethnicity is being co-opted by politicians as a means of maintaining and extending power. I have been thinking a lot about the statement by Said "The role of the intellectual: speaking truth to power". How do intellectuals speak truth to power when politicians are speaking lies to power? Kenyan politicians are appealing to ethnicity as an inevitable voting category. As during colonialism, when "divide and rule" was a powerful force in maintaining power across the continent, today we finding ourselves suck in the same patterns of rule. All the while, Kenyans are dying in riots. 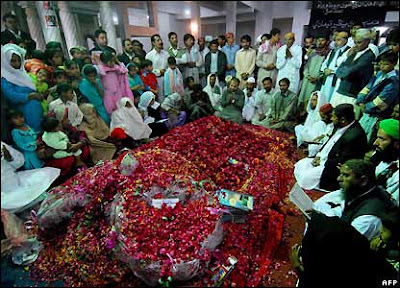 Pakistan: Bhutto's message was significantly undermined by the fact that she wished her son and husband to succeed her as the party chair. It doesn't make any sense to me. Musharraf says that Bhutto is to blame for her own death for taking unnecessary risks?! 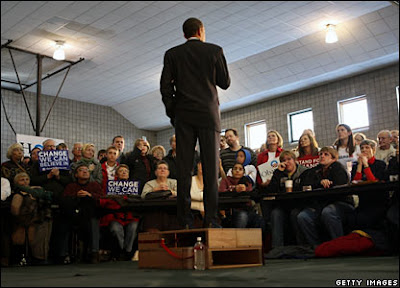 Selecting the U.S. Democratic Presidential candidate: Although I'm interested in the race overall, the democratic race seems likely to produce the next U.S. President. I'm a Wellesley graduate and so am drawn to the Wellesley Alum, Hillary Clinton. Although I would not be upset if she were to win, I look at the global experience of the Bush administration, and believe that the world may need someone who is inspiring and personable to heal. With the races in Iowa and New Hampshire swaying in Obama's favour, I'd love to hear from those who know.

It's striking how much politics is playing out in our daily lives. Personally, I don't want to be paralyzed or overwhelmed by news but I do want to understand enough to be engaged and also to pray. Being engaged really means seeing how much what is happening in Kenya matters to me. And it does.

I work on a project that serves Somalis, and one of the leaders of the projects said something very wise that I think speaks to the ways that politics matter. She said that Somali parents in Boston didn't want to talk with their children about their experiences fleeing war in Somalia, because they had done this amazing thing for their children by bringing them all the way to America-- thus making sure that they were safer, and their physical needs were provided for. They believed they took away from their children all these experiences of war and extreme suffering, and gave them education, a new future, a new home. It seemed like ingratitude for these same children to then be involved in drugs, drop out of school, or disobey their parents.

What they were not aware of was that many of their experiences of war doggedly followed their children, because these experiences were inside the parents.

Check back soon or consider subscribing by RSS feed.