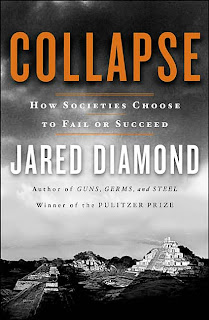 I was unsure of how best to read Diamond's section on the Rwandan genocide. It's really hard to write about the genocide, because it's very easy to [perhaps unintentionally] write in such a way that either minimizes the lives of those who died, minimizes the role of either Rwandans or of the French colonizers in causing the genocide, or somehow makes the genocide seem inevitable, leading to a sense of fatalism. As such, I've never really known how to write about it, and admire those who try. I give some suggestions below for further reading, on a few of the most accessible and insightful sources about the genocide.

Those South Africans that are reading, I think we always remember that while we were reveling in our new democracy, and in the incredible first elections of 1994, the genocide was beginning in Rwanda, and collectively turned a blind eye. Most people would have predicted genocide in South Africa, not Rwanda. At the same time, there were plenty of warning signs if people had been watching more closely.

Diamond focuses on the notion of overpopulation in his chapter on the genocide. He also looks at the genocide from the lens of an agricultural community that was almost completely Hutu. He explains how the land has a much higher population density than all of Africa. Historically, people supported themselves by subsistence farming but increasingly, population density pressured out this way of life. [as a side note, many people who study the genocide emphasize the role of unemployment, people with absolutely nothing to do and nowhere to go to improve their situation, were hanging around in Kigali]

One of the most shocking things about the genocide was that family members killed eachother. Diamond presents the context of small plots of land being seemingly infinitely divided, making each plot too small for subsistence. He explains this as causing increasing tension amongst family members, as disagreements evolved about how the land should be divided.

The snapshot is not complete, and Diamond does not claim it to be so. Those who read this chapter only may feel that genocide was inevitable or that no-one was to blame/no-one was responsible. Nevertheless, I think it was valuable in two ways: it emphasizes the ways in which a basic need for certain resources can create deep tensions that would otherwise not have been an issue. It also emphasizes that genocide was not just about Hutus killing Tutsis, which I and others strongly agree with but which was not always adequately conveyed in media portrayals.

The challenge in reading about the genocide is the questions that evolve:
1) What are our responsibilities in similar circumstances as random people in America or South Africa; is it arrogant to believe we have a role to play as part of a global human community?
2) Do our actions contribute to a similar lack of resources somewhere in the world, or on our doorstep?

Please do comment and think about this with me, because I know I have only raised the issues in a superficial way.

Further Reading on the Rwandan genocide:
We Wish to Inform you that Tomorrow We Will be Killed WIth Our Families by Philip Gourevitch.
When Victims Become Killers by Mahmood Mamdani