Happy New Year! Last year was a big year for us in its smallness: we didn't have any major life changes, though there were two trips to Korea (one with the whole family, one where Eug went alone) and lovely visits from friends. I interviewed women and conducted focus groups with migrants/refugees around the city, which was life-changing in its own way.  Eug completed his first novel, which is also a huge deal.

On the last day of the year, I suggested that our extended family head to Boulders (also known as the Penguin Beach). What I forgot was that EVERYONE (tourists, Cape Townians, everyone in the universe) had the same idea, and we were pretty sure Boulder's would be awful if it was super crowded (it's a tiny beach). Plus, living in Cape Town has made me feel uncomfortable if we're forced to share a beach with anyone else. I know. Spoilt much?

So we decided to find another beach, and went further down to Miller's Point. I'm hesitant to tell you about it because it's awesome and empty, even on the biggest beach day of the year. But you probably live far away, or if you live here then you probably have a job and can't just hop off to the beach, or I know you in which case it would be awesome to go to the beach together. And it's pretty far south, further than Simonstown. So telling you about this beach is, I suppose, a win-win.

There are lots of rocks, and a protected area that is great for swimming. Off to one side is a beautiful tidal pool, with a slide. And when there's wonderful photos, you know Eug came with.

Noah and Eli immediately wanted to jump around on the rocks like mountain goats. On the one hand, this is completely what I want for them: a simple existence where getting strong and nimble is fun and exciting. On the other, nothing makes me realize the problems in our current parenting of Noah than not feeling I can keep him adequately safe. He is cautious and will not do anything unless he feels safe, but he's been getting more confident and I am not sure if his own perception of safety gets wonky when he's starting to get tired, and the stakes here were too high. Big high rocks, with rocks below. He hated suggestions about safe routes, but picking him up when he didn't want to picked up would be even more dangerous, so I just tried to guide by example - to far away from the really high rocks. The lower rocks were fine. Oh well. 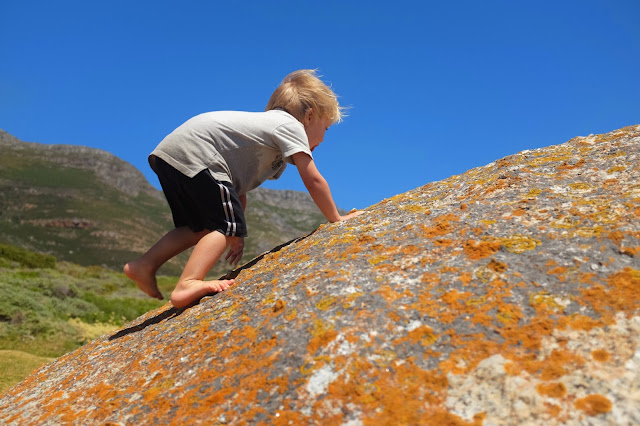 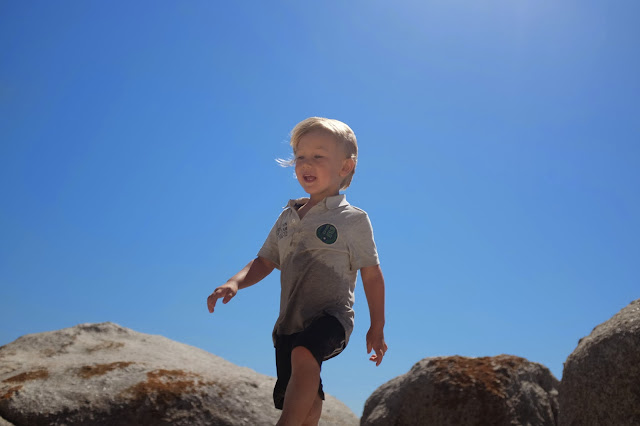 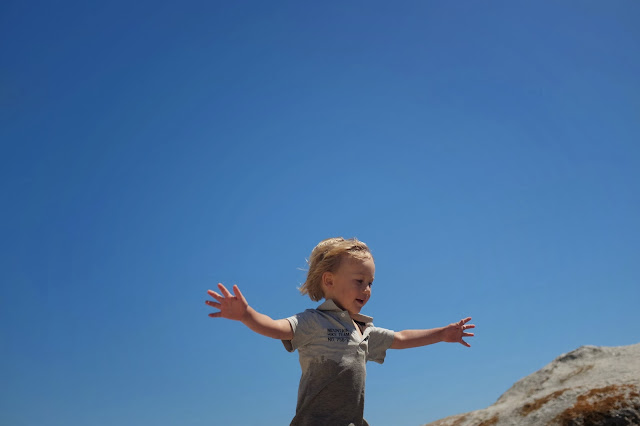 The water was cool but not too cold to swim, and calm enough to swim lengths in the area protected by a semi-circle of rocks and kelp. 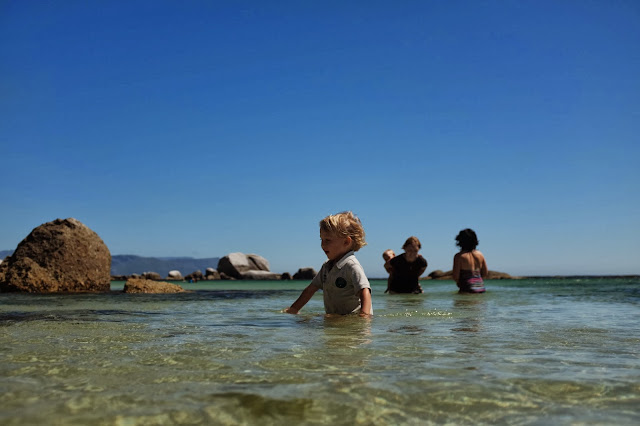 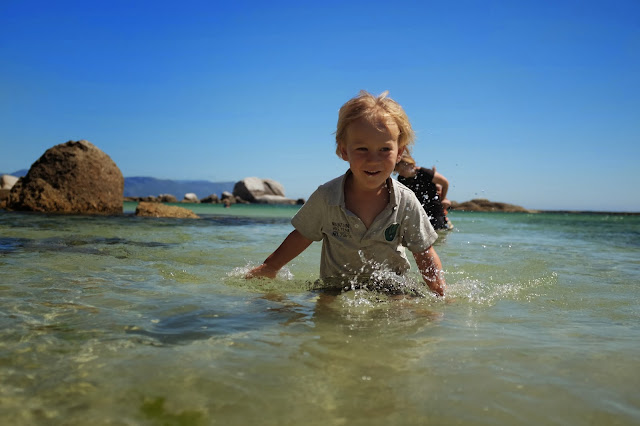 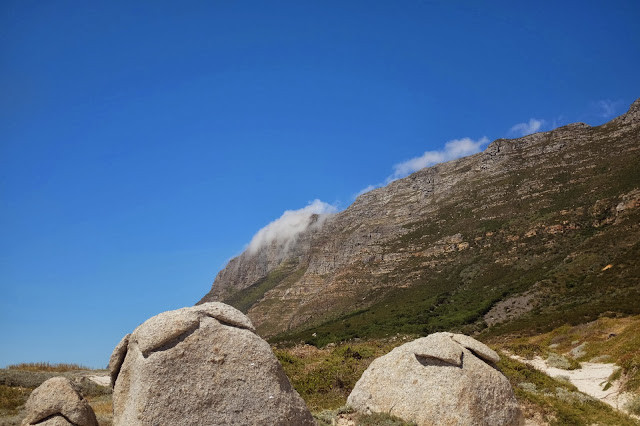 My brother's family brought a beach tent. The kids thought it was awesome. 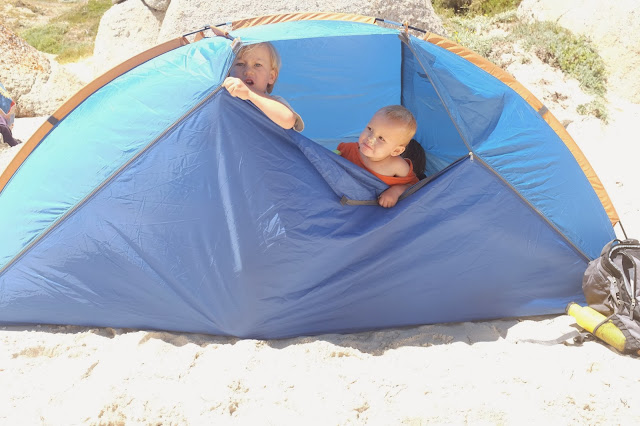 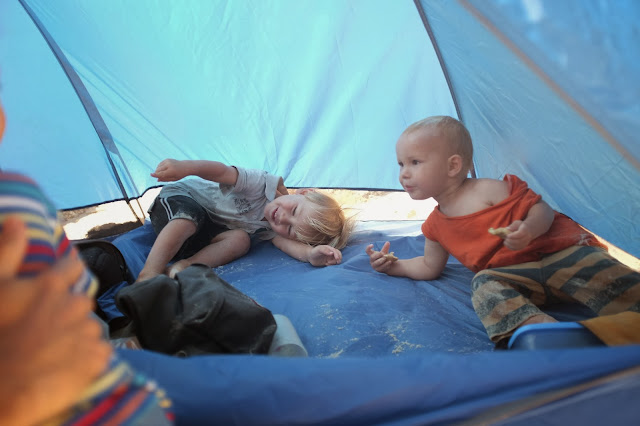 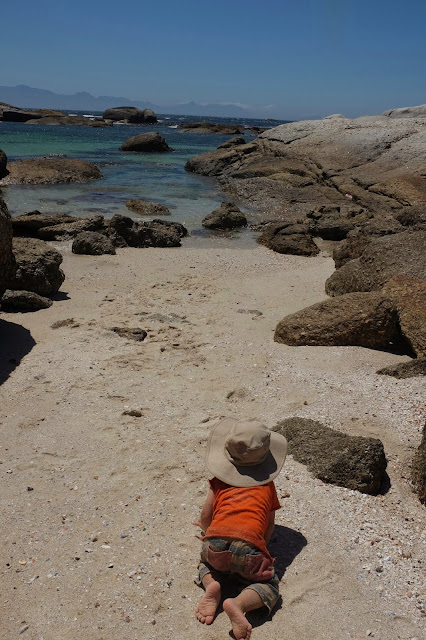 On the way home the kids fell asleep almost instantly, which meant we could take the long way home and explore vacant land in the area. We're very much hoping that a plot will become available in the next year or two, so that we can go from concrete gardening to homsteading, with a brief interlude for somehow selling our house and somehow building/acquiring some kind of structure on the plot to live in. 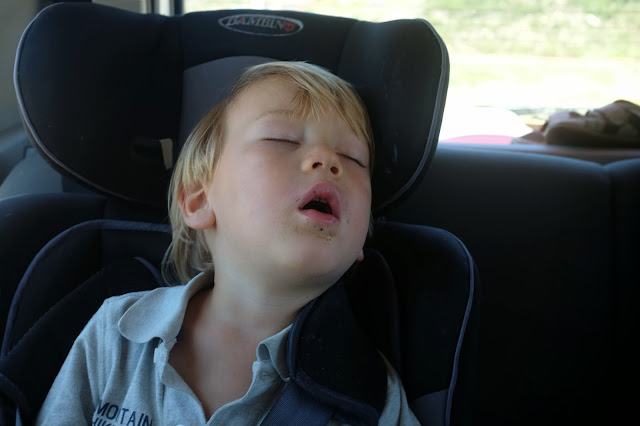 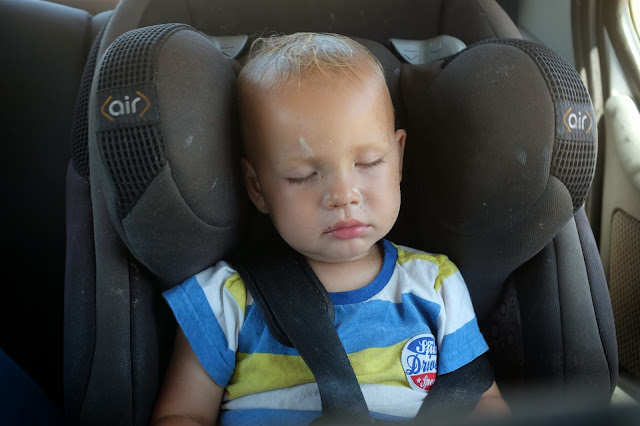