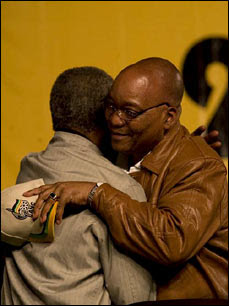 I remember in 1994, I was turning 11 during the first democratic elections, and was nervous about what would happen to South Africa. Many of my classmates immigrated, and I thought that when apartheid ended, I wouldn't be allowed to go to university. I didn't understand the concept of apartheid too well, or why our neighborhood consisted primarily of white people. But I remember being concerned, and that the only thing that made me comfortable with staying was the fact that if we left South Africa, my dog couldn't come with. That seemed like a pretty awful thing.

When I was 16 I left South Africa for Wales, UK. It was an exciting time for me. I realised there was something wrong with the system and the society in which I had lived, but I still didn't have a clear concept of what had happened, or the implications that apartheid had on the whole of South Africa. It was the privilege of ignorance.

"Without God, anything is permitted" (Dostoyevsky)

In Wales I began to see that I was very lucky to have experienced grace as a white South African. I have heard many South Africans who agree that apartheid was bad but say they didn't have anything to do with it. But, as with white Americans, the facts are like the elephant that's easily hidden in day-to-day life. The South African economy-- the schools I attended, the job my dad had, the infrastructure we enjoyed--would have been unimaginable if not built on the backs of non-white South Africans.

I know I, and many of you, have spoken and thought about this at length, so my purpose here is not to educate you about apartheid or to engender feelings of guilt. I don't want to say that South Africa doesn't have problems, or that you haven't personally suffered as a result of crime. Rather, I want to emphasize the privilege of having been forgiven in a very radical way.

Justice would have prevailed if non-whites had been given lump-sum payments and replaced whites in jobs, etc. That is not what happened. I know that today, affirmative action is happening, but I still received a scholarship in 1999 to go to Wales despite my race, and South Africans of all races still have many opportunities. I struggled to find a job during 2005 when I was in South Africa, but I didn't struggle to get into university. My family, who are not abroad as I am, has been safe and has been able to enjoy South Africa in a new way. Justice didn't prevail.

The African National Congress made a concrete decision to transition in peace. Although Nelson Mandela is the man praised for this transition, it is more clear now than ever that the ANC is a democratic organization, where the will of it's members, not the will of the leader, take precedence. The movement decided that the best way to achieve its ends was peacefully. I believe that they did what they believed was best for the country, but they also made an ethical decision. They made a decision about the value of human life-- value that had been consistently denigrated during apartheid. They made a decision, I believe, that because God exists, not everything was permissible in 1994.

There are difficult times ahead, especially under new leadership. Although I didn't support Zuma, and being here in Boston I'm far removed from everyday life in South Africa, what happens in South Africa is very important to me. May more South Africans experience grace in 2008.

Moving back from the ANC to me, 1994 was perhaps my most concrete and extreme experience of grace. As a result, I can't casually condemn or ignore unjust systems or individuals. There is a lot of power to be had in engaging, negotiating and thinking through beliefs together. This Christmas, I'm grateful for grace.

I love the quote by Dostoevsky.