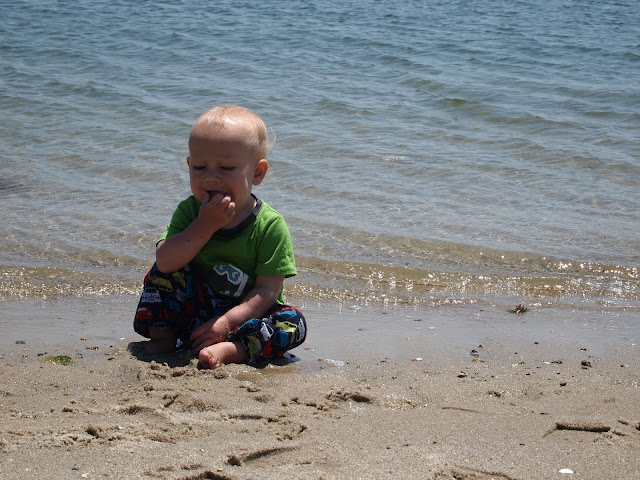 Our child still does not sleep through the night.  He got un-night weaned when we went to Korea, and hasn't looked back.  At some point, he's going to have to stop breastfeeding.  Ignoring for a moment the fact that I'm writing a post about it, I'm actually much less stressed about it than previously. Can I also just reassure you if none of the books worked for you?  They didn't work for us either.  Well, I guess I didn't try too many, because the cry it out thing just isn't for me, at least not until Noah is 18 months old. At that point, the universe shifts.

We decided that we'd just get rid of the crib.  A sign of resignation, and a look towards our move to Cape Town, where Noah will be 18 months old, have his own room, and where we can just shut the door and ignore him.  Kidding, kidding. I'm hoping we can cut the door in half and just shut the bottom half.  Probably kidding on that, too.

Noah is sleeping on his small mattress which is next to our small mattress, and overnight he creeps closer and closer to me.  He usually sleeps with his head on our mattress.  We're no longer worried about him suffocating and such, so he's on a duvet to try to disguise his own little mattress.  And it kindof works.  I say kindof because a couple times a night, he's sure he needs food, and I'm not terribly interested in arguing that point in the middle of the night. So I try to enjoy his tiny neediness, and reassure myself that he's only 13 months old, and he only has to start learning he's not the center of the universe at 18 months, right?

That said, we are placing a lot more limits on him, and I don't try to explain the mysteries of the universe as I'd started to when he was six months old. I'm accepting that, just as he needs to be the center of the universe a little while longer, he also doesn't understand too many long sentences.  He has to go to sleep, he doesn't have the option of going onto the street (NO), electrocuting himself (NO), eating the junk we're eating (NO), eating flies (NO), putting my cell phone in the toilet (NO) or being annoying (STOP BEING ANNOYING).  In brackets are the explanations I currently provide. Some are more helpful than others, I'll let you guess.

He will be the centre of the univers again when you get here!!! :)
Is it really going to happen!! Woooooaaaaaaa!!!! :)

The universe DOES shift at 18 months! Unless it happens at 16 or 20 months... still, sometime soon!

Unless you're a grandma and in that case the child never stops being precious little angel face and that's why grandma's take toddlers OUT of the house WITHOUT parents so that parents can turn a blind eye to unmitigated spoilage.

Also, I have yet to find a good way to say "STOP BEING ANNOYING." Mostly we say, "Uh oh, does someone need to go back to bed?" Sometimes that works. Or just letting him scream in the bed, that works too ;)