About ten years ago I was at College of the Atlantic (a hippy school in Maine) visiting Elisheva, and I balked at a sign asking residents not to flush the toilets unless they really had to. My mind couldn't wrap around the water waste associated with flushing toilets, it was just on my list of hygienic necessities.

Then this week, after reading some of the Humanure handbook and some other texts, I found myself totally convinced of the waste associated with flushing so much potable water. I wondered what was practical in our context in an urban setting- we can't create giant composting toilets or dedicate a large worm bin just to human waste. 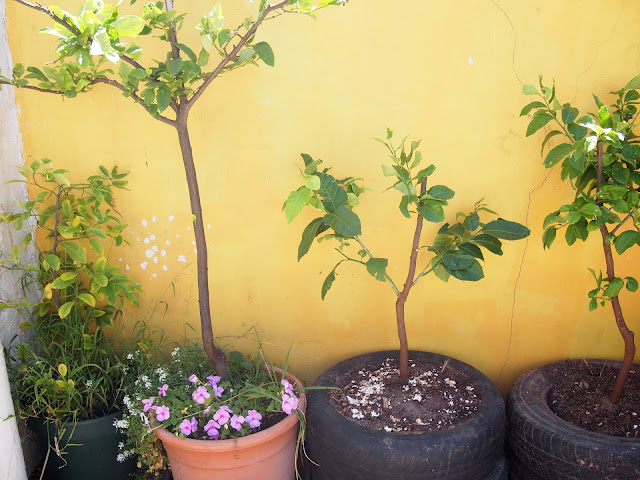 So, as a start I snuck one of Noah's potties in the toilet and started collecting pee for our 4 lemon trees. The toilet paper went to the worm bin. And while a very token gesture, it crossed a line, a very fun line.

Okay Jo you asked for it. This reminds me of a story.

I was maybe about eleven years old and my parents would occasionally leave me at home by myself.

Well, I was still afraid of the dark and as a result, I didn't want to walk down the long dark hallway to our bathroom, so instead I pee'd in one of my mom's houseplants.

Let's just say my mom was none too happy when her plant developed an ammonia-like smell.

My mom wasn't given to spats of anger, but she was REALLY upset.

I don't think my story has any moral or deeper meaning. It's just a pee story involving plants.

I love it! I'll let you know if there's a vague pee smell in our back area. Or I'm sure Eug will.