A Simple Baby (At least for the first year): Part 1 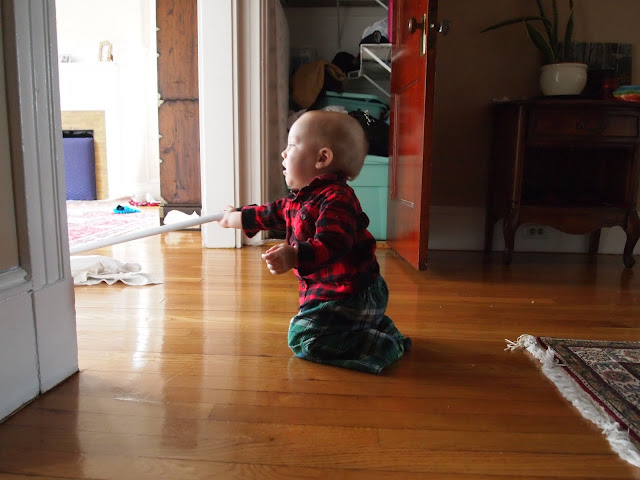 It's hard to capture all the changes our family has gone through since Noah arrived. We didn't get any miraculous parenting wisdom, or any other kind of wisdom. I became my own parents' biggest fan. It dawned that, as someone who is always waiting for Life's Next Big Event, the Big Event has come, and we are living it now. Not that Noah was himself the Big Event (though he was, in a way), but that there was nothing bigger to come. Some old and deep cliches about the present being a gift resonate.

I couldn't think of a good segway from "Being a parent is awesome" (see above) to "here's what you might need, don't buy too much" (see below), so I gave up. Here's a picture of Noah digging to fill the awkward transition: 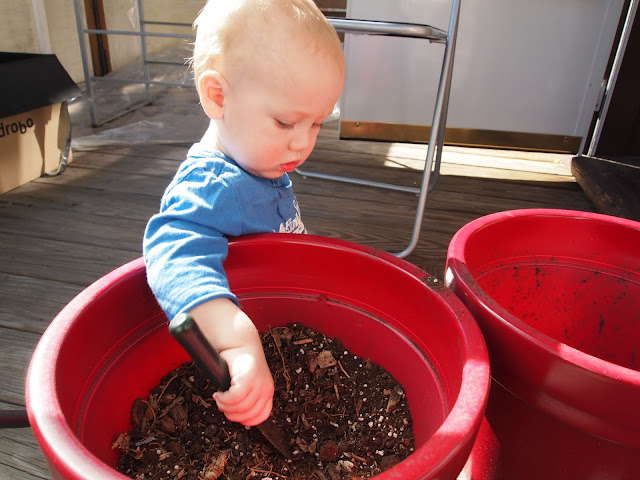 Aah, but the awkwardness continues a couple more sentences. While I really want to convey in this post that it's possible to keep having a baby simple, affordable and relatively environmentally friendly, I couldn't write a simple post about it! So it's going to be a series. But a Simple Series. Really.

The Exhaustive List of What Our Baby Needed in Year 1
Big Ticket Items (Part 1):
Space to Sleep and later, Play (in our case, we delayed getting a bigger place, but it was inevitable)
Someone to take care of him at all time (in our case, a parent).
Health Insurance and money to pay the huge deductible.

Stuff to Play With (Also not sure if this needs a post?)

Sleep and a Chance for His Parents to Shower (Part 4)
Rocker/Glider
Crib
We had a little cosleeper thing in the bed with us, because we were scared we would squish Noah- not sure if we'll need that next time.
Jumperoo (Only as a chance for dad to shower)
Reclining Baby seat

That's it! That's all we got! (I did fudge over clothes and toys up there, but there's no need to go too wild in either category) (Unless you want to.) 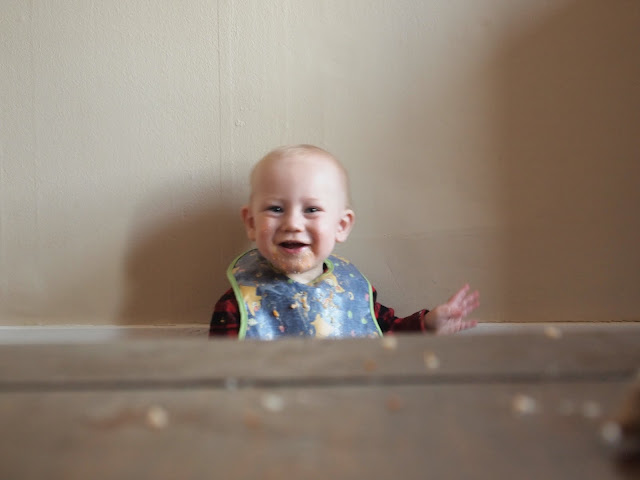 Oh, and bibs. Lots and Lots of bibs.

Part 1: The Big Costs
The big ticket baby items for many families are housing, daycare, and maybe medical care.

Housing is big not only financially, but also environmentally. We've moved twice since Noah was born, just because of life circumstances. But we saved about $2400 by staying in our tiny one-bedroom while Noah was little and immobile. During the first four months, all he needed was love, attention, milk, and lots of diaper changes, and not having to deal with a bigger apartment was great. We did need to move later on, and our housing expenses really increased. That said, our vision is to stay in the smallest house we can, and in the most central location possible. I'd love a garden and chickens one day, but we're not there yet.

Figuring out how to afford life [in Boston] and take care of Noah was hard. Our decisions worked for us, partly by serendipity: my work does not easily translate to independent or from-home work, but I'd worked with the same employer for a couple of years and they were really supportive and flexible about how I got to my 40 hours/week. Eug went freelance around the time I got pregnant, which was scary financially but exhilarating for all the possibilities it opened up for us. The cost of good daycare would be about the same as the income we've given up, without the stress of wondering whether Noah's taken care of. I get to spend most afternoons with Noah, which makes working full time less difficult in the short term.

I can't give advice on daycare and couples' work without feeling icky and under-qualified, so I won't-- I know that this is the most personal of decisions and one that every family really ponders and struggles over. That said, it was important for us that didn't use our community or family tradition as our only reference point-- whether that reference point was daycare from tiny or saving towards my becoming a stay-at-home mom. It was something that had to work for our family, and for us, what works seems to change over time, just as Noah changes.

The medical costs for Noah's birth were about $1000 (it makes me almost wish I'd made it to one of those nice wood-paneled delivery rooms). We have very mediocre insurance (which is cheaper per month but makes life difficult when we actually need it) so we save a little every month, that would otherwise go to more expensive insurance plans, and have it ready when we need something.

Wow, you had to pay a grand out of pocket with insurance??? That sucks! We pay $3000 per birth for our midwifery care because it's the only way to have a homebirth in Massachusetts. In New York or New Jersey it would be free with insurance... such is life.

As for the stuff issue, I kindly and gently suggest you may be forgetting some things that you have around for Noah's sake. I made a list recently for a pregnant friend of everything I needed in the first year (excluding toys which you don't need in the first year, and books which you do) and even though we consider ourselves major hippies and resisted buying ANYTHING we didn't absolutely need, the list is still pretty long. I've posted it below. Seriously, tell me you got through Noah's first year without liquid tylenol or a rectal thermometer or burp cloths, and I'll be impressed.

- diapers
- wipes
- wipes warmer (I can't live without mine, but many people do, so take that for what you will)
- rectal thermometer
- bulb syringe
- baby tylenol
- bottles (we used medula stage 1 nipples for everything, so I don't think it's necessary to start off with multiple stages of nipples if you're breastfeeding.)
- breast pump (and also nursing pads and nursing bras)
- humidifier (I'd say this is 85% necessary.... you don't need it most of the time but when he's sick it's a lifesaver)
- car seat
- stroller
- bjorn or other on-body carrier
- burp cloths, which is to say regular old white cloth diapers which come in packs from Target.
-changing table
-pad for changing table
- 3-6 cloth covers for the changing table pad
-monitor
-baby soap, tears free
-baby powder
-diaper rash cream
-baby sized comb & brush (they're softer than the adult versions.  Only necessary if your child has hair, though)
-hats
-bouncy seat: I loved the bjorn babysitter bouncy seat, but I'm sure any old sort of seat would do, or swing to suspend from the door frame, or anything like that.  You just need something that the baby can sit in and be entertained for 5 minutes to give your arms a break sometimes.
-high chair
-bowls, baby spoons, and sippy cups (starting at 6 months)
-childproofing: stair gate, outlet plugs, thingy to hold cabinet doors closed for the cabinets where you keep bleach

I don't use bibs, though. I think they look silly and aren't much better than changing into a clean shirt ;)

Yeah, I wasn't a big fan of my insurance by the end. They have a $750 per quarter limit per person, but Noah counted as a new person so we went over (not that he's not a new person, but it still feels a little evil).

But, good point. Lots of infant tylenol, and a thermometer. And yes to the outlet covers, though Noah just takes them out! I keep on thinking of things that I'm forgetting...